Ready or not, Marmite Peanut Butter is here — and it’s vegan.

The unique spread combines crunchy peanut butter and the classic yeasty flavors of Marmite. It’s the first permanent combination flavor to the “love it or hate it” brand since 1902. The company recommends pairing it with crumpets or spreading it over toast for breakfast.

“The new recipe retains the umami taste of Marmite, but mingles these classic flavours with the smooth and salty flavour of peanut butter to create a delightfully savoury blend. Then there is that nutty crunch… What’s not to love?,” states the website. “Even if you are a hater, remember that two wrongs can sometimes make a right.” 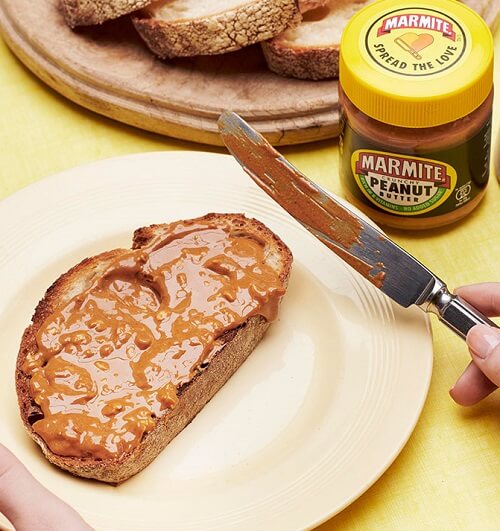 Camilla Williamson, Marmite brand manager, said, “The British public asked, and we listened. We’re delighted to bring the nation exactly what they’ve been craving with the creation of Marmite Peanut Butter.”

British Twitter had mixed feelings. “This is more controversial than Brexit!!,” one remarked.

“This… It’s like you can read my mind,” said another. Others commented that they already mix their own Marmite and were happy to have the option to buy it in stores.

Though the new Marmite Peanut Butter is divisive, it’s not the first time the spread has been mixed with savory food. Papa John’s UK launched a vegan version of its popular Cheese and Marmite Scrolls earlier this year.

Vegan chef Katy Beskow swears by adding a teaspoon of Marmite to chilis, stews, sauces, and braises. “It’s salty and umami-packed, and it gives a dark, deep flavor to savory dishes,” she wrote for SELF.

The Unilever-owned spread is also fortified with vitamin B12, which helps keep the body’s nerve and blood cells healthy and plays a role in the creation of DNA. Vitamin B12 is typically obtained from meat, eggs, milk, and cheese, so it’s essential that those following a plant-based diet are mindful about whether they are getting enough B12.