Veganism has reached hit TV series MasterChef UK, and the judges’ reactions may surprise you. Contestant Matthew Campbell, who is competing on MasterChef: The Professionals, served a “raw, vegan, sugar-free” dessert. Skeptical? Don’t be. Apparently, “the judges love it”.

The dessert was a “vegan raw cacoa delice encased in a Jerusalem artichoke rosti tuile”.

Presenter Gregg Wallace told Campbell, “I think this is brilliant”. He also stated: “I’m really amazed that you can take almond milk and a Jerusalem artichoke and turn it into this”.

Chef Monica Galetti said: “Wow. I don’t recall having a dessert like it before. It makes me think outside of the box in understanding how you’ve made this… That’s impressive”.

The contestant, who has now made it to the semi-finals week, shared his success on Twitter, commenting that he is “over the moon”. 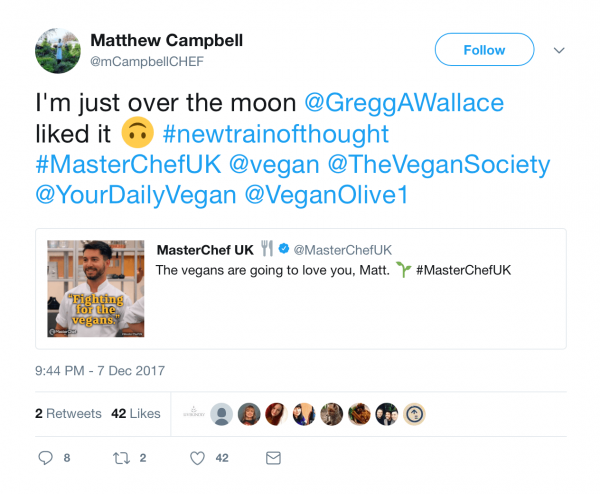 The plant-based dish has made an appearance following announcements that the upcoming MasterChef series would feature “a lot of vegan ideas, a big push on vegan food”.

Judge Marcus Wareing described this addition as “interesting and challenging – in a good way”.

Interestingly, it was recently revealed that plant-based desserts were set to be one of the biggest dessert trends of 2018. In fact, vegan food sales are rising in general, so it’s safe to say the movement won’t be slowing down any time soon.