Called the Big Vegan TS, the new option features Nestlé’s new plant-based Incredible Burger. Made from a blend of soy and wheat protein, the uncooked veggie burger looks like a traditional raw beef patty. When cooked, it’s said to have a juicy, meaty texture like the Beyond Burger or the Impossible Burger. McDonald’s Germany has a veggie burger made from quinoa, but it’s vegetarian.

The burger itself consists of the meat-free patty served with mustard, ketchup, onion, tomato, and greens. At 17 grams of plant-based protein per patty, it has just as much protein as McDonald’s classic beef burgers. It’s cooked separately from other burgers in order to avoid contact with animal fat.

According to German food news site eKitchen, the new vegan burger was one of 200 products that McDonald’s develops in Munich each year. Fewer than a quarter of products end up in restaurants. The Big Vegan made it, a spokesperson said, because it delivers the flavors that customers expect from the fast-food joint. 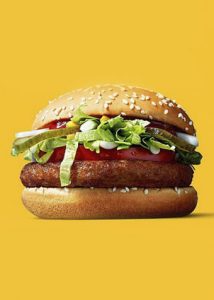 Will the ‘Big Vegan TS’ Be Available in Other Countries?

There are no known definite plans to launch the Big Vegan TS in any other countries, although this could change in the future.

According to CNBC, Nestle Europe’s chief executive Marco Settembri has revealed the food giant is open to expanding its partnership with McDonald’s and exploring other avenues. He said, “McDonald’s is an exciting and big customer, but it is not the only option and we have quite good capacity to cope with a (possible) extension beyond Germany.”

A handful of international McDonald’s locations have added vegan options to the menu in recent years.

In the UK, customers can now order vegan goujon wraps, a veggie patty sandwich, and a vegan Happy Meal. Vegan options are reportedly also coming to Australia soon. “We understand there is a rising demand for vegan and vegetarian options, and we are always open to suggestions from our customers,” a spokesperson said earlier this year.

Earlier this year, McDonald’s Norway introduced veggie nuggets, made with a blend of chickpeas, cauliflower, corn, onion, and potatoes with a crunchy coating. India has the McAloo Tikki, a sandwich consisting of a spiced potato patty.

For dessert, McDonald’s apple pies are vegan across the world. In the US, McDonald’s fries are seasoned with beef flavoring, but are vegan in other countries.