Updated 8 January 2020 | McDonald’s meat-free burger made with Beyond Meat’s vegan patty will be available 52 locations in Ontario, Canada from January 14.

The burger is called the Beyond Meat P.L.T., short for plant, lettuce, and tomato. McDonald’s describes it as “juicy, delicious, perfectly dressed.” It contains no artificial colors, flavors, or preservatives. During its launch, the P.L.T. was available at 28 Canadian locations.

“McDonald’s has a proud legacy of fun, delicious and craveable food—and now, we’re extending that to a test of a juicy, plant-based burger,” Ann Wahlgren, McDonald’s Vice President of Global Menu Strategy, said in a statement during the initial trial last year. “We’ve been working on our recipe and now we’re ready to hear feedback from our customers.”

“We’re excited to hear what customers love about the P.L.T. to help our global markets better understand what’s best for their customers,” said Wahlgren. “This test allows us to learn more about real-world implications of serving the P.L.T.”

Beyond Meat’s CEO and Founder Ethan Brown expressed his enthusiasm for the partnership in a statement. “Being of service to McDonald’s has been a central and defining goal of mine since founding Beyond Meat over a decade ago,” said Brown.

“It comes after a long and productive collaboration to make a delicious plant-based patty that fits seamlessly into McDonald’s menu,” added Brown. “We’re thrilled with the outcome.”

The addition of the P.L.T. follows the success of the Impossible Whopper at Burger King restaurants in the U.S. Sales rose by 28 percent in April 2019, the month that Burger King welcomed its meat-free Whopper.

This is 26 percent higher than the sales boost experienced by U.S. locations of McDonald’s during the same period.

Meet the P.L.T., a delicious, juicy plant-based burger, that will be available for a limited time as a test at selected restaurants in Southwestern Ontario.

The Beyond Meat P.L.T. is a first for McDonald’s North America. However, the fast-food chain has already tapped into the growing vegan movement in other areas. McDonald’s Finland first introduced a vegan burger option at all of its 65 locations across the country in late 2018.

McDonald’s restaurants in the UK now offer a vegan Happy Meal option. Diners can choose to have the kids’ meal with veggie split pea-based goujons and dairy-free red pesto sauce. McDonald’s said the move was motivated by a poll which found that 33 percent of its customers wanted more meat-free options from the chain.

The Beyond Meat P.L.T. will be available in 52 McDonald’s restaurants in Ontario, Canada, from January 14. 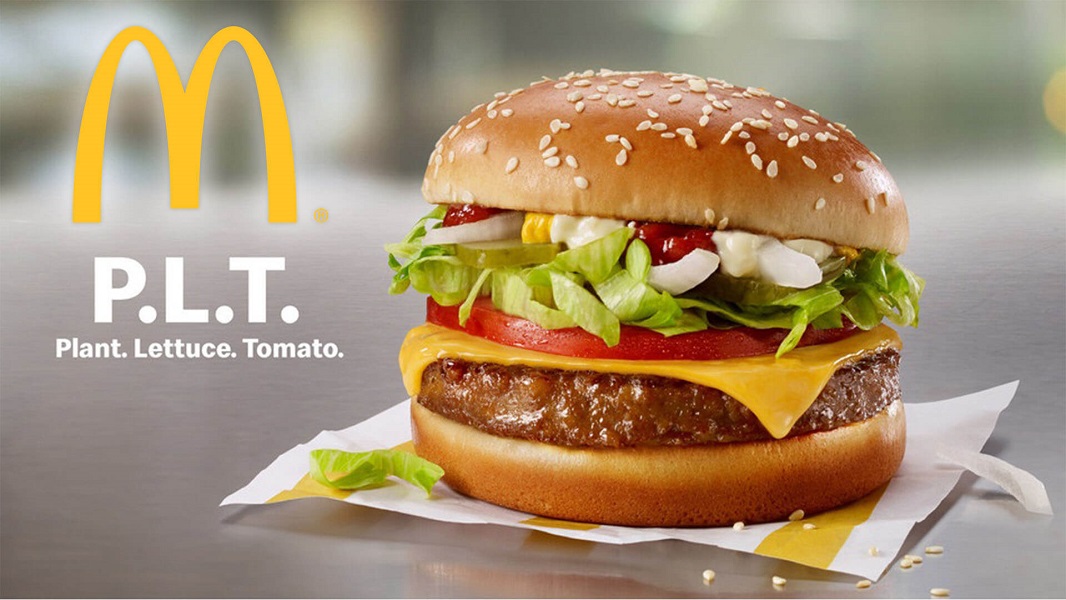