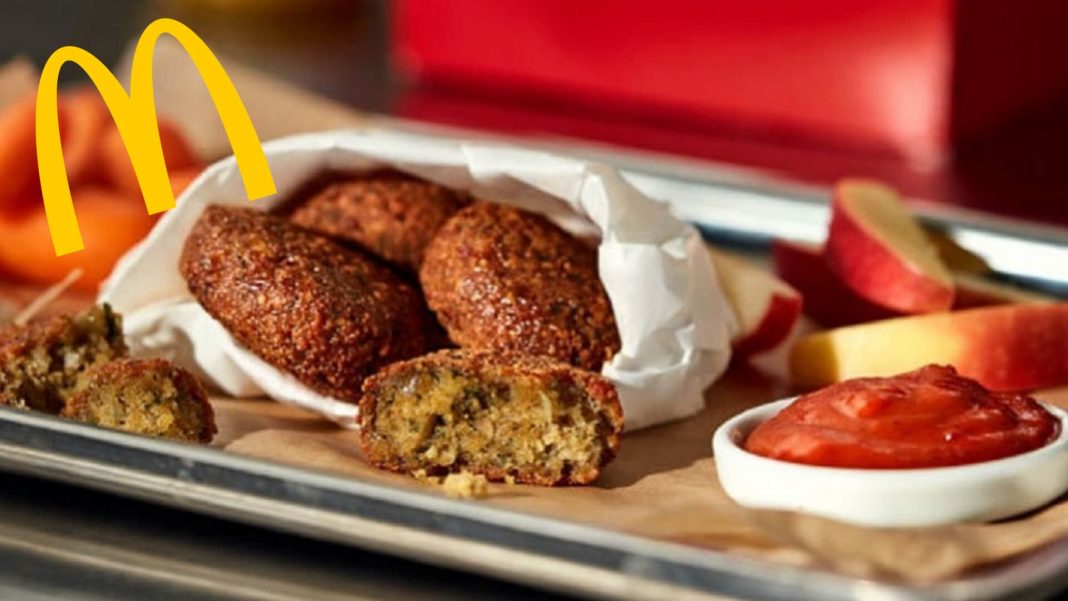 McDonald’s Sweden has added a new vegan menu option. After the success of the McVegan sandwich, a soy-based burger patty featuring an eggless McFeast sauce, the chain is now offering something just for the kids: The McFalafel vegan Happy Meal featuring falafels made with chickpeas, parsley, garlic, and cumin, and served with a vegan pepper sauce option.

The global fast-food giant launched the McVegan burger in Sweden and Finland in 2017. While sales in Finland have reportedly met forecasts, the chain said its sales of the McVegan exceeded expectations in Sweden.

According to a recent poll by Animal Rights Sweden, almost 1 in 10 Swedes now identifies as vegetarian or vegan. “Among the under-30s, the figure is an even more staggering 1 in 5,” reports NPR. “But perhaps the most eye-catching statistic from McDonald’s viewpoint is that half of Swedes expressed an increased interest in choosing vegetarian options during the last year. It’s these folks, the flexitarians, who are the McVegan’s real target audience.”

McDonald’s kicked off 2019 with the launch of a vegan Happy Meal option in the UK as well: veggie goujons with a dairy-free pesto. The launch coincided with the popular UK-based Veganuary campaign. Fellow fast-food giant Pizza Hut launched a vegan jackfruit pizza in the UK at the beginning of January, exceeding its sales target for the month in less than two weeks.

“It is especially important for young veggies to be able to choose something to eat when they are out with their friends,” Lynne Elliot, chief executive the Vegetarian Society, which certified the new vegan UK option, told the Evening Standard. “With the new Spicy Veggie Wrap and Veggie Happy Meal carrying our trademark, diners can trust their meal is one hundred percent vegetarian.”

Demand for vegan food has never been higher. In Sweden, meat consumption has hit a record low.

The nation’s shift toward a more plant-forward diet may be most evident in Sweden’s most notable export: home furnishings chain IKEA. The big box store has added vegan Swedish meatballs and hot dogs to its cafes and bistros. It’s already sold over a million of the vegan dogs since launching last year.

IKEA is also set to launch dairy-free soft-serve at all U.S. locations by the end of 2019 and shoppers now have dairy-free oat milk smoothie options as well in UK locations.