The new vegan option—which can be ordered in select stores using the app—consists of strawberry sorbet, according to Peta Zwei. It can be topped with Oreo pieces, which are also vegan. The sorbet can also be ordered as a McSundae.

It’s not yet confirmed if the burger will launch anywhere else in Europe. Nestlé’s Europe chief executive told CNBC last year, “McDonald’s is an exciting and big customer, but it is not the only option and we have quite a good capacity to cope with a (possible) extension beyond Germany.”

In McDonald’s Sweden, customers can order falafel nuggets and the McVegan burger. In Norway, veggie nuggets are available. And in the UK, the chain offers vegan goujon wraps and a vegan-friendly burger (just remove the mayonnaise). 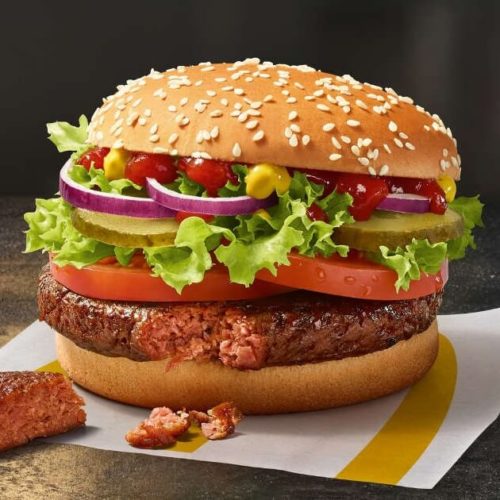 McDonald’s isn’t alone. Earlier this year, KFC launched vegan chicken burgers in all of its locations across the UK. Burger King also launched its Rebel Whopper. The menu option—which includes a vegan meat patty by the Vegetarian Butcher—is cooked on the same grill as meat.

“We’re always looking into new and exciting ways to develop our menu,” said Pizza Hut’s senior menu innovation manager Ciara Grace in a statement. “The Vegan Stuffed Crust was naturally the next step for us to grow our plant-based offering at Pizza Hut restaurants.”

She added, “we’re confident it’s going to be a hit.”

Subway also launched its vegan Meatless Marinara sub earlier this year. The sandwich includes vegan meatballs and dairy-free cheese. Colin Hughes, the chain’s country director for UK and Ireland, said: “we’re always shaking up our menu at Subway, as we are constantly innovating. Our guests wanted a meatless version of our iconic Sub, so we made it for them!”