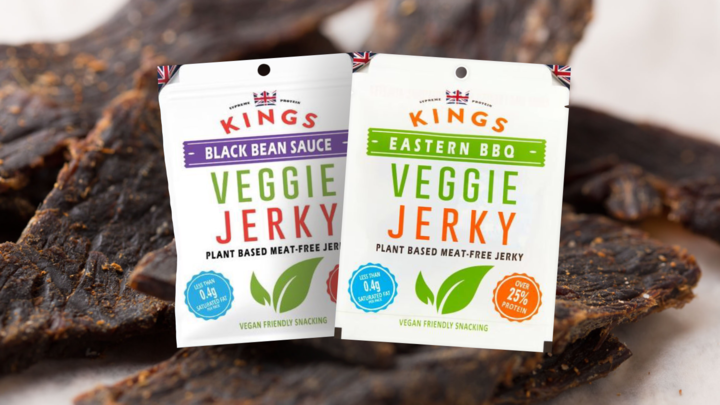 Kings Elite Snacks has launched the vegan version of its signature jerky in Aldi supermarkets.

The British company traditionally specializes in meat products, with flavored strips of marinated and air-dried beef making up the majority of its range. However, it does also offer vegan meat options.

Made with textured vegetable protein, the plant-based jerky is more than 20 percent protein and contains less than 0.4 grams of saturated fat.

The company also offers vegan protein bites in a number of supermarkets, including Sainsbury’s, which contain more than 29 percent protein. According to Posted Protein, the dried strips of vegan meat taste just like crispy duck. It notes, “this vegan-friendly snack is hands down the tastiest vegan product the world has ever seen.”

The plant-based snack market is growing; according to a report by Future Market Insights (FMI) from November last year, it’s set to exceed a value of $73 billion by 2028.

FMI’s report followed another conducted by Research and Markets in July. The report identified the rising popularity of vegan food as an obstacle to the meat-based snack market, which includes products like meat jerky as well as meat sticks and pickled sausages.

New vegan jerky brands are consistently emerging to fulfill demand, and like Kings Elite Snacks, many existing meaty brands are launching new vegan products in a bid to keep up.

Last year, 50-year-old meat business Urbani Foods decided to launch its first plant-based line of jerky. It also announced that the shift towards vegan-based products would be more permanent, and it would be scaling back its meat-based options to become a more sustainable company.

“Sustainable agriculture means providing healthy food to the entire population, and the inefficiencies in raising an animal for food mean that it is not feasible to meet this goal going into the future,” Claudio Urbani, the CEO of Urbani Foods, said last year.