When you think of oats, meat might not be the first food that crosses your mind. It’s likely you associate the grain with breakfast cereal or, more recently, delicious dairy-free milk. But oats are versatile. They can be transformed into many things, including protein-rich vegan meat.

Finnish food design entrepreneur Maija Itkonen and food scientists Reetta Kivelä and Zhong-Qing Jiang understand the potential of oats better than anyone. Together, they founded Gold&Green. The vegan brand makes meat out of oats, no animals required. 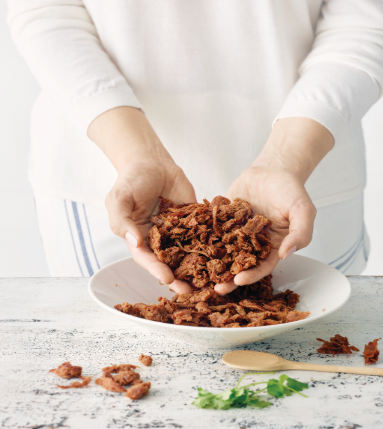 Pulled Oats™ are made from five simple ingredients.

Gold&Green’s “revolutionary” Pulled Oats™ aren’t ultra-processed. They’re made from just five simple ingredients — oats, canola oil, pea protein, fava bean protein, and salt. The product is made by creating a “pulled” fibrous structure with the oats and legumes. To achieve the meat-like texture, Gold&Green use mechanical processes, including mixing, pressing, and heating.

Gold&Green told LIVEKINDLY, “while Pulled Oats™ can be used in many recipes instead of beef, pork, or chicken, it’s not meant to exactly mimic any one type of meat.”

“This desire to create a delicious plant-based protein that is not tied to a specific animal or mocking a cut of meat is exactly what inspired the co-founders,” it continued. “Instead, Pulled Oats™ is a delicious, climate-friendly plant protein that stands on its own.” 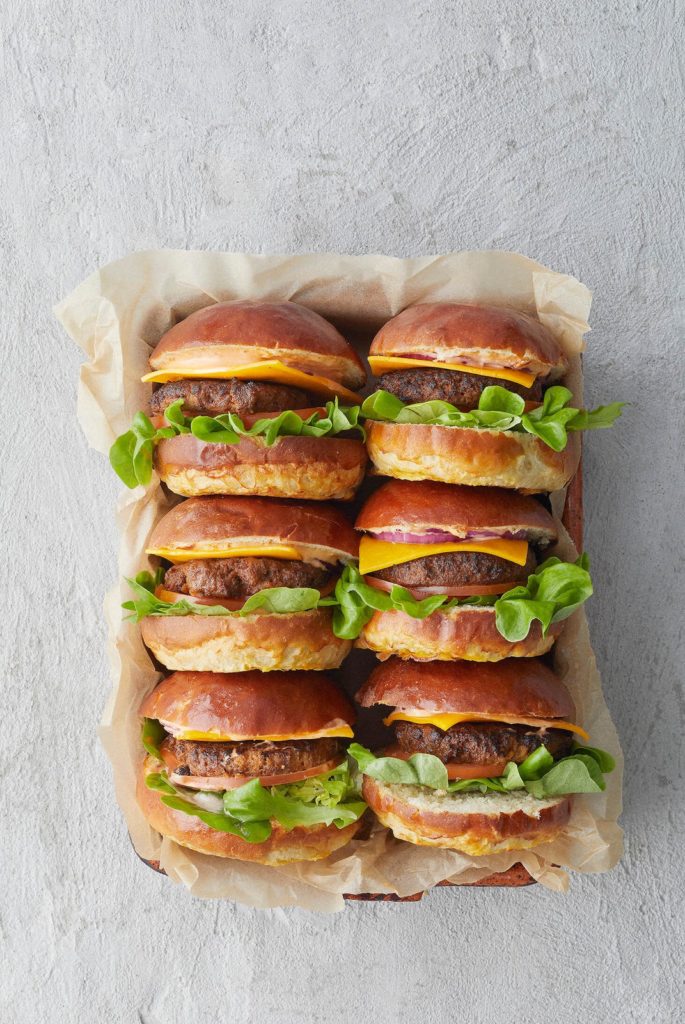 Producing a pound of Pulled Oats™ uses less than 10% as much water as is used to produce a pound of beef.

Gold&Green wants to give people a product that’s easy to prepare and tastes even better than meat. The brand states on its website, “forget ‘meh’ and ‘just ok.’ meals made with Pulled Oats™ will tickle your taste buds and make your mouth water.”

It’s a bold statement, but the brand has proof to back it up. Earlier this year, it taste-tested its Pulled Oats™ Meze Balls and Miniburgers at South by Southwest in Austin, Texas. The verdict? Meat-eaters loved it. Ninety-four percent of those who tried it — 59 percent were flexitarian and 22 percent were meat-lovers — said they would recommend Pulled Oats™to a friend.

One cowboy at the event told Gold&Green, “I usually don’t like vegetarian products that try to imitate meat. But this one had excellent texture and taste. I really love your product.”

If you’re suitably intrigued, Pulled Oats™ is currently on sale in supermarkets across the Netherlands and Finland. Next year, the plant-based product will be available in select U.S. restaurants, and soon, potentially U.S. retailers too.

If you live in the UK, there’s a chance you may have already tasted Pulled Oats™. In May, Mexican-inspired fast-food chain Taco Bell launched the limited-edited Edgy Veggie Taco — made with Pulled Oats™ — in honor of National Vegetarian Week. Itkonen said in a statement at the time, “we are very happy to combine Taco Bell’s experience in taste with our high-quality plant-based protein.”

After the successful pilot in the UK, Taco Bell decided to add Pulled Oats™ to the menu in all of its 53 restaurants in Spain. Taco Bell Spain now offers Pulled Oats™ as one of its vegetarian menu options.

As well as tacos, Pulled Oats™ can be incorporated into a variety of dishes. If you’re a fan of Italian cuisine, add the vegan meat to your next bolognese or lasagna. If Thai is more your thing, try it in Pad Thai. If you love Korean, add it to Bibimbap. Want to keep it simple? Add Pulled Oats™ to a salad or even make it into a sloppy joe. 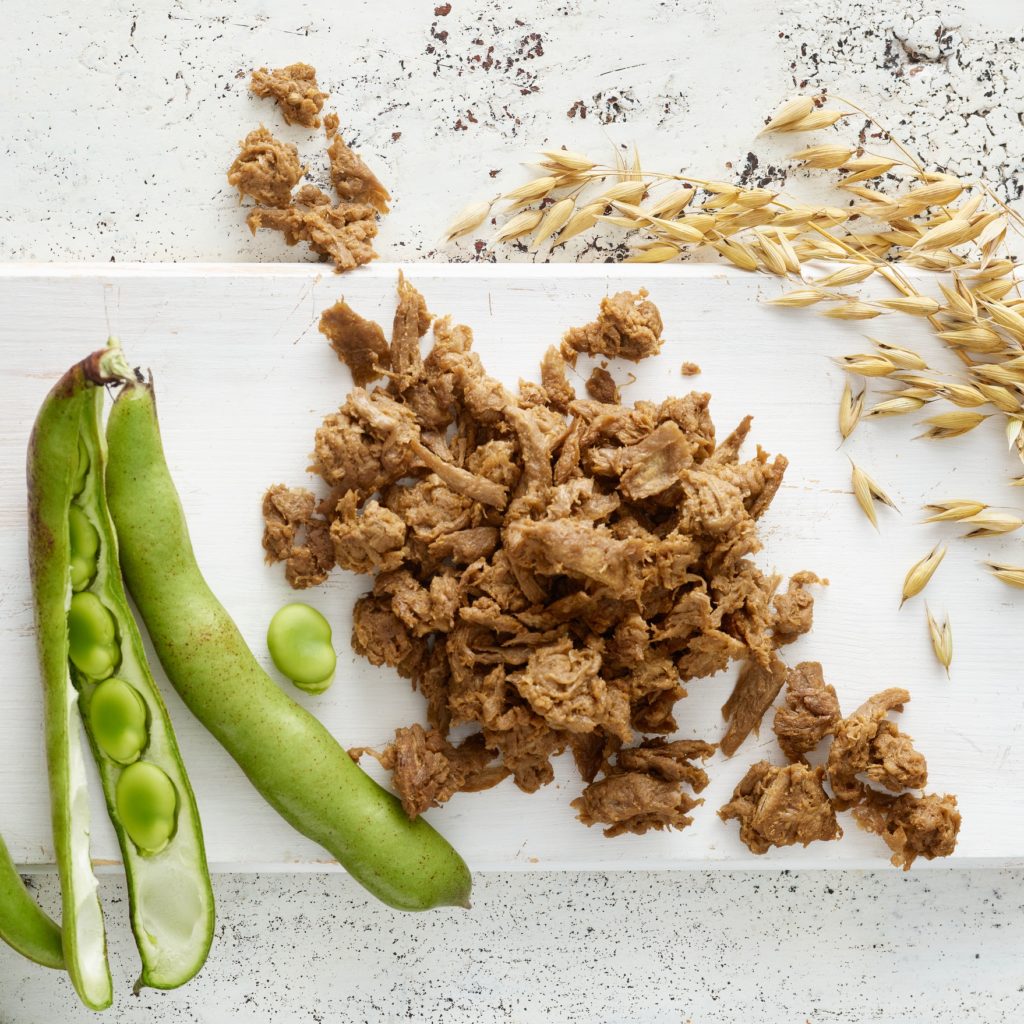 Pulled Oats™ are packed with protein.

The Health Benefits of Oats

Itkonen, Kivelä, and Jiang chose to make their debut product using oats for a number of reasons. Not only are they versatile, but they’re also nutritious.

Oats themselves are high in fiber too, and they’re rich in magnesium. The mineral not only regulates blood pressure but is also anti-inflammatory and helps enzyme function. Oats also contain beta-glucans, which slow the absorption of carbohydrates into the bloodstream, this reduces spikes in blood sugar and insulin.

Experts say that incorporating oats into your diet can lower your cholesterol, potentially reducing the risk of heart disease. Due to beta-glucans, they can also help to prevent type-2 diabetes. Oats can boost fullness and potentially even help your immune system.

According to Healthline’s Icelandic nutritionist Adda Bjarnadottir, some studies show that consuming oats can enhance the body’s ability to fight bacteria, viruses, fungi, and parasites. 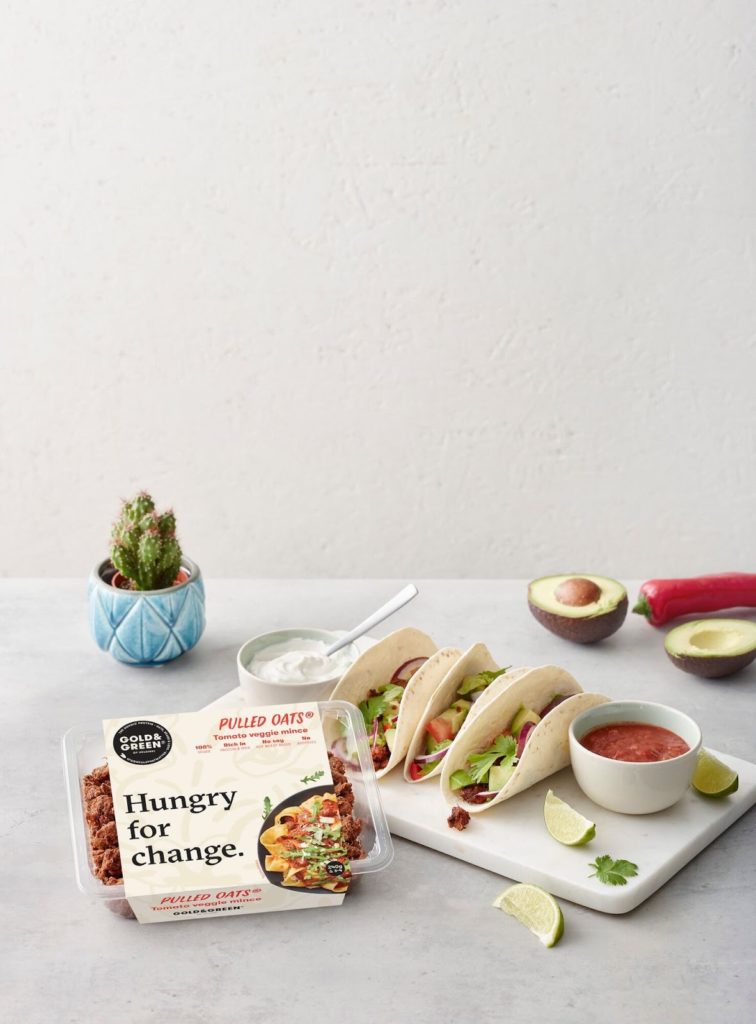 Pulled Oats™ are easy to prepare.

Oats Are Kind to the Planet

There’s also the environmental aspect. The traditional meat industry is not sustainable.

According to the United Nations, our use of animals in the food system has brought us to the “verge of catastrophe.” The international organization said last year that tackling meat consumption is the world’s most “urgent problem.” It stated, “there is no pathway to achieve the Paris climate objectives without a massive decrease in the scale of agriculture.”

Animal agriculture is responsible for a huge amount of environmental issues, including high levels of greenhouse gas emissions and deforestation.

Gold&Green’s Pulled Oats™ impact on the planet is pretty small. Oats love the Nordic climate and its long cold winter and magical midnight sun. Oats are also one of the most environmentally-friendly crops to grow; they don’t require much land and “perform well in crop rotation systems,” says Gold&Green.

The brand explained to LIVEKINDLY, “they reduce soil erosion and suppress weeds. In addition, oats are high yield crops and require a relatively low amount of water to grow,” it continues. “Pulled Oats™ require less than 10 percent of water to produce than beef.”

According to Gold&Green, choosing Pulled Oats™ is a choice towards creating a better, healthier body and environment. It says on its website, “Pulled Oats™ is the best way to make all the meals you’ve loved since you were a kid without changing anything. Well… except for the world of course.”