The NYC Department of Correction has introduced Meatless Mondays for inmates, correctional officers, and jail staff.

On Mondays, everyone at the Department of Correction, which jails around 7,000 inmates in 11 correctional facilities across the five boroughs, will be served a variety of meat-free foods throughout the day. Dishes include veggie chili, fresh fruit, cereals, and veggie burgers.

The department’s normal everyday menu features a number of plant-based foods, including steamed vegetables and fresh fruit, however, it also features meat-based items, like chicken patties.

“Our regular menu not only exceeds many FDA standards but by joining the Meatless Mondays initiative we are providing more nutritious options once a week,” said Correction Commissioner Cynthia Brann to New York Daily News.

She added that the meals aren’t just better for inmate health, but they’re also kinder to the planet. The meat industry is responsible for a wide range of environmental problems, including high levels of greenhouse gas emissions and deforestation.

“We are also proud to be encouraging a healthier planet with less of a carbon footprint,” Brann added. “Our hope is that individuals leave our custody more mindful of the benefits of a reduced meat diet, both for themselves and for the planet.” 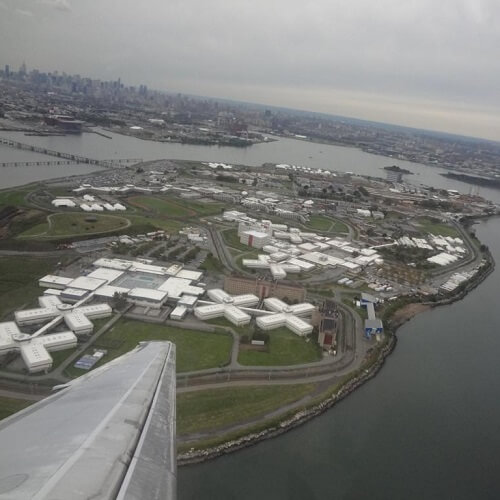 The notorious Riker’s Island complex is home to most of the city’s prisons. | Wikimedia Commons

The Department of Correction follows in the footsteps of New York City’s public school system, and its public hospitals. In January 2019, the latter introduced vegan Meatless Monday meals. The president and CEO of Health + Hospitals Dr. Mitchell Katz said the initiative is about empowering patients to live healthy lives after they leave the hospital.

In March, Meatless Mondays arrived at all New York City Schools — the largest public school system in the world. Mayor Bill de Blasio said at the time, “cutting back on meat a little will improve New Yorkers’ health and reduce greenhouse gas emissions.”

De Blasio has been open about the fact that he eats meat but is trying to find more balance in his diet by eating more plant-based foods. He believes Meatless Mondays will help New Yorkers also find that balance.

Glenn O’Connor — the Department of Correction’s nutritional services director — agrees. “Going meatless once a week can reduce a person’s risk of chronic, preventable conditions like cancer, cardiovascular disease, diabetes, and obesity,” he explained.

“It can also help reduce our carbon footprint,” he added. “And save precious resources like fossil fuels and fresh water.”