Frozen vegan pot pies by plant-based, GMO-free brand, Alpha Foods, are set to arrive at Walmart stores across the US this August.

Beefy Cheddar, Chik’n Veggie, Pizza, and Buffalo Chik’n are the new flavors available in the line, Alpha Foods confirmed to VegNews. Select Wegmans and Kroger stores will also be stocking the new pies, in June and July respectively.

“Our new delicious line of plant-based pot pies provide consumers a fast, on-the-go option outside of the meat and cheese options typically found in the freezer aisle,” said Loren Wallis, CEO of Alpha Foods. “Our ultimate goal is to appeal to vegans and non-vegans alike and to offer new frozen food alternatives that help support the planet and the creatures on it – both two-legged and four.” 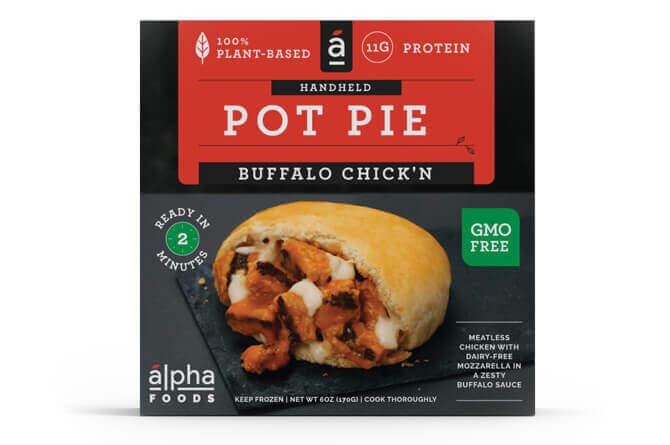 Founded by Loren Wallis and Cole Orobetz, Alpha Foods was created for everyone, including vegetarians, flexitarians, and reducetarians. “We firmly believe it should be easy to find the protein you need in the meals you want,” the founders state on the company’s website. “That’s why we are always going for gold when it comes to 100% plant-based meals. Whether you are choosing a meatless life or a meatless Monday, we make food for your lifestyle: easy meals for everyday life that are totally, completely plant-based.”

This is not the first vegan addition Walmart has made recently. In January, the retail giant added macadamia nut vegan milk brand, Milkadamia, to its shelves. Further, in December, Walmart launched an array of vegan meal kits.

Last September, the US chain even published an article advising their suppliers to produce more vegan-friendly items. The store acknowledged a trend for plant-based foods and asked companies to consider their marketing tactics to appeal to vegans and vegetarians.

“Even if your target market isn’t vegans or vegetarians,” the chain stated on Walmart News Now, “you may still have plant-based foods in your assortment that could meet the needs of these consumers.” It continued, “What kind of marketing could you do that would get your products in front of folks looking for plant-based foods?”