Prince Harry and Meghan Markle made headlines in January after announcing they would be stepping down from their roles as senior royals. But despite leaving her position as a member of the royal family, the former Duchess of Sussex is still supporting the royal animal charity, Mayhew.

The UK-based animal welfare charity works to improve the lives of dogs and cats. It also helps homeless individuals care for their companion animals. Additionally, Mayhew offers community-based veterinary care and education services in the UK and overseas.

The organization’s website still lists Markle as a patron. Mayhew’s PR and media officer, Sarah Hastelow, told Newsweek: “[Meghan’s] been such a champion of animals and animal welfare. It’s always been a passion of hers.”

Mayhew has been struggling financially amid the coronavirus pandemic. The organization made an “urgent care package appeal” on its website. The message called for “desperately needed” supplies of food, litter, and flea and worm treatment.

“We receive no government support or anything so we rely completely on public donations, which are for the most part gathered from fundraising events,” said Hastelow. She continued: “It’s been a steady decline of operations and funds. We are trying to be as adaptive and reactive as possible.”

Hastelow said Markle first became involved with the organization in 2018. She said the Duchess had “been in touch” with the charity following her departure from the royal family but couldn’t disclose further details. 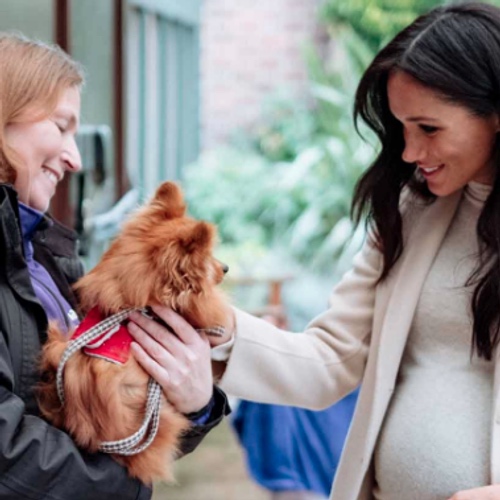 Markle visited Mayhew in January. According to Mayhew’s Instagram, the organization showed her new kennels the charity added last year. Markle was also able to meet with a few of the animals Mayhew has been caring for.

Markle talked about her love for animals in a foreword she wrote for Mayhew’s 2018 annual report.

“As a proud rescue dog owner, I know from personal experience the joy that adopting an animal into your home can bring,” Markle wrote. She continued: “The role that we, as people, play in rehoming and rescuing these animals is vital, but the role of organisations such as Mayhew is unparalleled.”

Her patronage of Mayhew isn’t the first time Markle has advocated on behalf of animals. She is a lover of cruelty-free fashion, and Prince Harry gave up hunting because of her disdain for the “sport.”