Southern California has its fair share of vegan vendors specializing in Latin American cuisine. Visit any Los Angeles Vegan Street Fair or Orange County Vegfest, and you will not lack for authentic vegan mole, hand-pressed corn tortillas, or loaded vegan nachos. However, the sweet side of Mexican cuisine had yet to be explored, until Earvin Lopez started Vegan by Victorias in the fall of 2017. What began as a personal weight loss journey and search for happiness, Lopez’s commitment to the vegan diet has blossomed into a successful vegan bakery specializing in traditional pan dulce. Vegan by Victorias has quickly gained a massive following among locals and the greater vegan community, gaining a coveted spot at this weekend’s Vegan Street Fair San Diego Nights.

Lopez grew up in his parent’s Orange County-based Mexican bakeries (panederias), but never aspired to continue the family business. He worked for a company that manufactured race car parts but found himself both unhappy and overweight. Two years ago, he went vegan to get his health back on track and has since lost over 115 pounds. He also started cooking his own meals and baking as a hobby. At this point, veganism had grown in popularity in Southern California, but he craved the conchas and tres leches of his childhood.

Following advice from his father, Lopez quit his job and threw himself into his new business. He previewed his pan dulce (Mexican sweet breads) at the 2017 SoCal Vegfest, and the success of that event gave him the confidence and the customers to officially set up shop. He began by selling his small collection of Mexican treats in a roll-away pastry cart within his sister’s panederia (Victoria’s Bakery), but as his creativity and customer demand increased, the shop underwent a massive renovation. Lopez’s vegan goods are now front and center when one walks up to the cashier, and the non-vegan goods are placed off to the side.

The bakery has a number of sweet treats on display, including conchas, besos, tres leches, bolillos, puerquitos, mil hojas, and more. Lopez said the conchas are a best-seller, but he noted that the besos (moist and fluffy coconut-covered cookies sandwiched together with strawberry jam) are a close second. He also does tres leches cakes, cupcakes, and custom cakes. “The biggest cake we catered was to a fellow vegan artist, Sandoner, and she ordered a vegan quinceñera cake to feed up to 200 guests,” he said.

His authentic pan dulce has introduced the vegan community to a new culture through food, but it has also filled a gap for the Latin American vegan community. Lopez noted that he has had customers drive as far as Arizona to get a taste of these familiar foods that remind them of childhood and family. He said that his customer demographic is typically those 24 years old and up, mostly vegan Latinos and Latinas.

Although he has a successful storefront, Lopez still participates in pop-up events, such as Vegan Street Fair, as well as smaller vegan events in the Inland Empire. “One of the main reasons I’ve continued to do pop-ups is the fact that many people follow me from different places and can’t make the drive out to Orange County, so I like to head out to them.” He continued, “I just generally love the atmosphere of pop-ups and meeting new people and talking to fellow vendors whom many I consider friends now.”

Vegan Street Fair Nights San Diego will be the bakery’s first time in San Diego, but Lopez affirmed that the 80-plus mile drive is worth it. “I decided to make the drive since many people have made the drive from San Diego to us and I thought why not go out and meet them.” 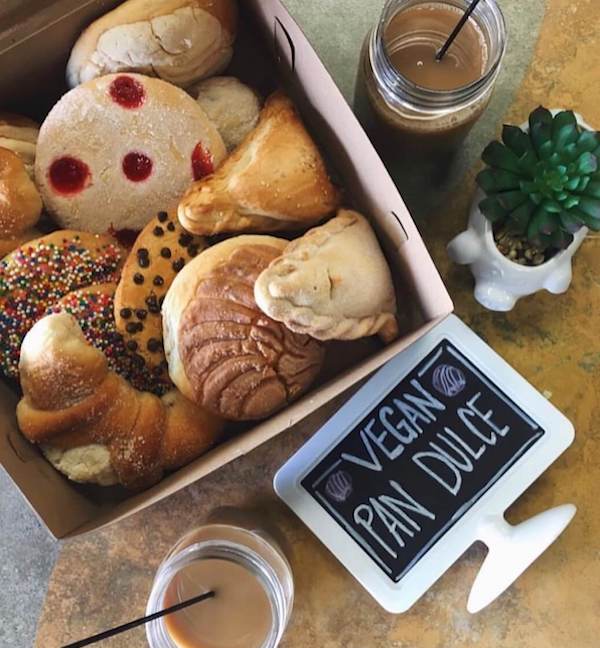 Lopez finds a strong sense of belonging and support in both the vegan and Latino communities. He partners with several vegan vendors to produce his savory bolillos, explaining, “I try to support as many vegan vendors as I can, because as a fellow vegan Latino, it makes me so proud seeing the rise in Latino vegans, especially in our community. As Latinos were we are raised on such a meat-heavy diet and having the highest rates of diabetes, it’s great to see that we are starting to be awoken to the danger and cruelty of the meat industry, and if I could show the vegan version of something I grew up eating and let people know where they can get it, it shows that we can all live a cruelty-free life without sacrificing our cultural foods. But I also feel that we should be uplifting all our fellow vegans that are out there weekly hustling and making an honest living.”

Before letting him go, we had to ask the expert – what is the best way to eat a concha? “The best way to eat a concha for me is with a cup of vegan champurrado!” Lopez advised. You can purchase your own concha and champurrado at Vegan by Victoria’s in Santa Ana, CA or a selection of his pan dulce at Vegan Street Fair San Diego Nights on Saturday, May 12. Tickets are available here.