Miley Cyrus delivered a passionate speech to her fans about the state of the environment.

At the close of the Tinderbox Festival in Odense, Denmark last month, the “She Is Coming” artist spoke up about ocean pollution in an expletive-laced call-to-action for activism.

“All of you know how important it is for you all to be involved in politics,” Cyrus said. “The youth, this generation, we are the last [expletive] hope on this dying [expletive] planet. It is begging you to [expletive] go clean up the [expletive] oceans.”

Her pro-environment message was met with cheers from the crowd, iHeart Radio reports.

The 26-year-old pop star continued, “I don’t like there’s more [expletive] trash in the water than living [expletive] animals that deserve to be there, that have nowhere else to go. And by the [expletive] way, we don’t have anywhere to [expletive] go, either! There’s no planet B, so don’t [expletive] up!” 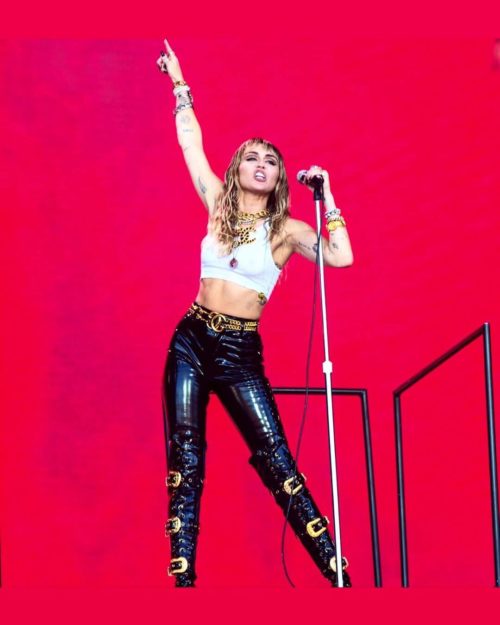 The State of the Oceans

Cyrus is right — there is no “Planet B.” Ocean pollution has come to the forefront of environmentalist messaging. It’s estimated that there are billions of pounds of trash in the water, endangering the lives of seabirds and marine life, who ingest or get tangled in trash. The Center for Biological Diversity estimates that plastic trash will outweigh fish by 2050.

While single-use plastic bans have become a symbol of preserving the oceans, it’s estimated that fishing nets, not straws, make up 50 percent of the trash.

Cyrus follows a vegan diet, so fish is off her plate. The fashionista often speaks about animals when talking about her wardrobe choices.

“I want to bring a message, which is veganism, and that there doesn’t have to be torture in fabulous fashion,” she said at last year’s Met Gala, where she wore a gown by sustainable designer Stella McCartney and custom MINK shoes.

Ensuring that her clothing choices have minimal impact on the planet is just as important to her.

“Choosing to live as a sustainable vegan activist means wearing more vintage (less waste; loving pieces for longer),” she said in an interview with Vanity Fair. “Playing with the newest eco-materials and technology, and making custom vegan pieces with some of my favorite designers.”

Cyrus also regularly speaks out about other social issues, such as pay wage gaps and discrimination against the queer community. The singer herself is gender-fluid and pansexual. Speaking on her marriage to vegan actor Liam Hemsworth, she told Vanity Fair: “We’re redefining, to be [expletive] frank, what it looks like for someone that’s a queer person like myself to be in a hetero relationship. A big part of my pride and my identity is being a queer person.”

Cyrus’s Tinderbox Festival speech included an additional message: “I was told backstage that I might offend some people by calling my country sh—y,” adding, “my friends that are gay … feel unsafe to walk on the f—ing street.”