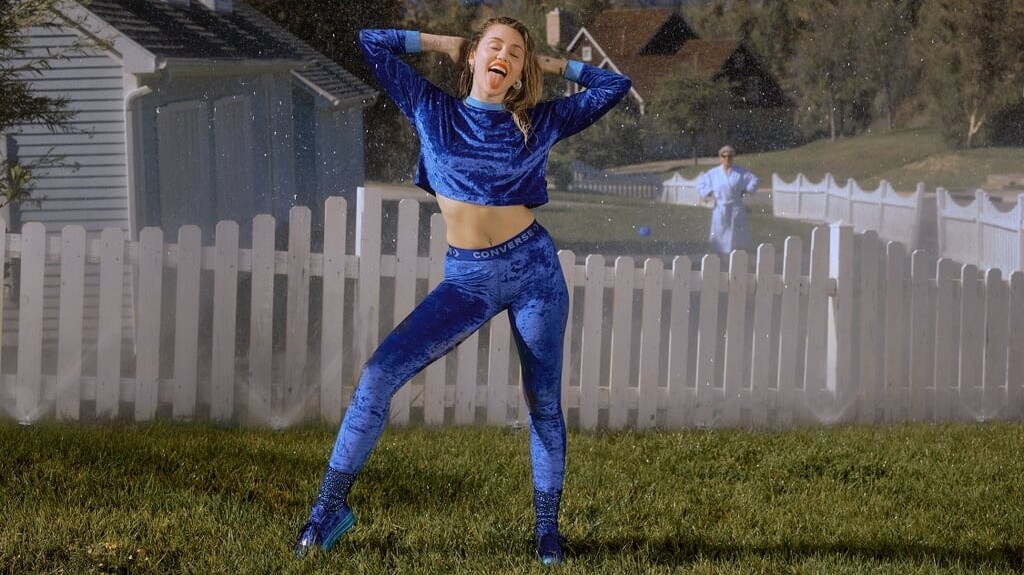 Vegan celebrity Miley Cyrus has launched a shimmery holiday collection with Converse. Called Converse x Miley Cyrus, the collection marks the star’s third collaboration with the iconic shoe brand, and everything is vegan.

The 19-piece vegan collection features festive, shimmering shoes that reimagine the classic Chuck Taylor All Star, along with gender-neutral streetwear.

Cruelty-free fashion lovers can choose from a wide range of vegan sneakers, including high-tops, low-tops, and platforms that feature brushed velvet and a dreamy shimmer – a nod to glam rock’s heyday. The more subtle shoes in the collection are made from vegan patent leather. Fans can grab a black, white, blue, or pink pair; low top and high top are available.

Other pieces include sleek leggings, Converse star-laden velour pants and sweatshirt, a lush velvet shirt and legging set, satin puffer jacket, and cotton crops. Prices range from $45-$130 and the collection is available for purchase now.

Be fearless. Stand out. Because fitting in is overrated. Converse x @mileycyrus, available now at converse.com #ConverseXMileyCyrus

Cyrus is known for being vocal about her vegan lifestyle, particularly when it comes to her fashion choices. Last October, cruelty-free shoe brand MINK made a pair of vegan stilettos for Cyrus. The heels are covered in glitter, feature singer Sir Elton John’s name, and a heart-embellished instep.

Over the summer, Cyrus launched the vegan Converse Pride Collection. The openly pansexual star worked with Converse to create rainbow-patterned sneakers and streetwear-inspired apparel. She also helped Converse create the original vegan Converse x Miley Cyrus Collection. The Converse website describes the collection as a “mix-and-match collection for Miley fans of all ages and genders, shapes, sizes, and unique styles.”

Last May, the vegan fashionista wore a black Stella McCartney dress with a low-cut back. Cyrus posted photos of herself in the dress with the captions, “not killing animals is f*cking hot!” and “It’s so much cuter to NOT kill animals!”

While at the event – and wearing the dress – she said the following to reporters, “I want to bring a message, which is veganism and that there doesn’t have to be torture in fabulous fashion.”