Miley Cyrus, vegan celebrity and singer-songwriter, made her first appearance in three years at the annual Met Gala on Monday night. Every year, the star-studded gala is centered around a theme that dictates celebrity fashion choices. This year’s theme was “Heavenly Bodies: Fashion and the Catholic Imagination,” designed to create a dialogue between fashion and religious masterworks.

In a video produced by Vogue, 25-year-old Miley spoke about what inspired her choice of outfit: “I’m here, so excited to be a part of this because I think this moment can be about so many different things and for me, I want to bring a message, which is veganism and that there doesn’t have to be torture in fabulous fashion.” 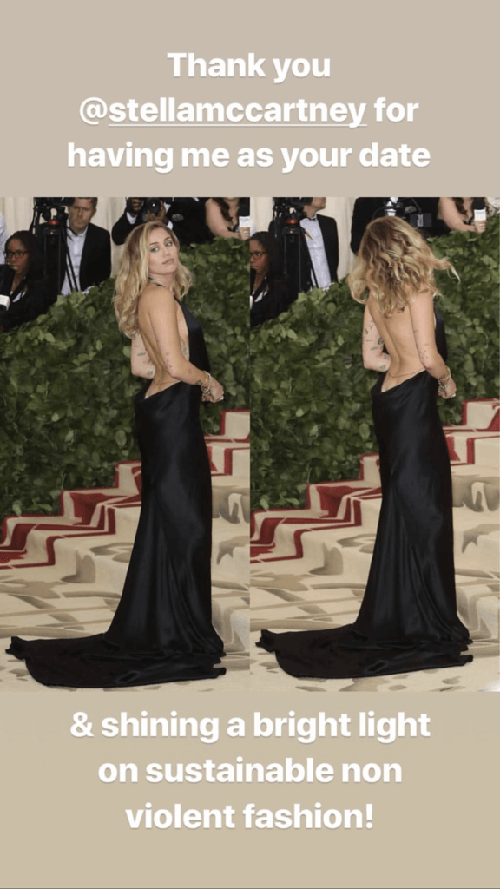 “Stylish and sustainable at the same time,” Stella McCartney, the vegan fashion designer behind Miley’s dress, added. Stella joined Miley on the red carpet, along with actor Paris Jackson.

A vegan since 2014, Miley is not afraid to wear her heart on her sleeveless ball gown. Last year, the star took to Instagram to show off her new vegan tattoo, The Vegan Society’s sunflower logo. That same year, she and sister Noah Cyrus received the Libby Award for Best Voice for the Animals, which recognizes individuals who use their platform to spread a vegan message, from animal rights organization peta2.

The Met Gala is not the first time that vegan Miley has made it her mission to marry her passion for animal rights with her love of fashion. Earlier this month, she released the vegan Converse x Miley Cyrus Collection, a collaboration between Miley and the iconic shoe brand featuring a range of vegan shoes and clothes. Last year, the vegan celebrity sported a pair of hot pink heels by vegan brand Beyond Skin for a spread in Cosmopolitan magazine.