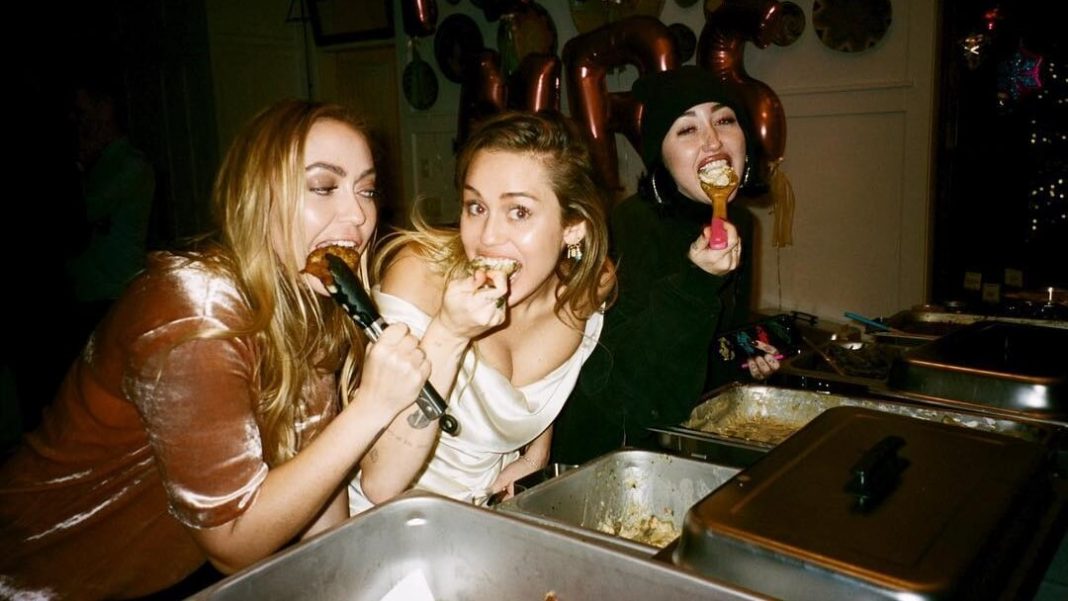 The pop icon married Hemsworth last December in a private vegan ceremony at their Tennessee home over the Christmas holiday week. She released a series of photos on her Instagram on Valentine’s Day, calling Hemsworth “My Valentine every single day,” in one post.

The 26-year-old shared candid photos of herself and family including a snap of her and her sisters Noah, 19, and Brandi, 31, diving into the serving dishes of vegan food. “Best part of bein the bride ….. skippin the buffet lines,” the singer wrote. She also used the hashtag #HotNonViolentAnimalLovingHusbandsAreHottest – husband Hemsworth is also vegan.

A source told US Magazine that all the food at the Cyrus-Hemsworth wedding reception was vegan and had a heavy Southern twist to it.

Other photos on her Instagram page show Cyrus goofing around with her flower bouquet in provocative positions, grinning with her mom, kissing her dogs, and dancing with new hubby Hemsworth.

The two have been on-again-off-again for nearly a decade but became noticeably closer in the last year, particularly in recent months after the deadly Malibu Woolsey fire that rocked southern California last November. Cyrus and Hemsworth lost their home in the fire. While Cyrus was out of town at the time Hemsworth managed to rescue the couple’s animals, which includes seven dogs, four horses, three cats, and two pigs. It was a move that seemed to cement the couple’s destiny.

“My partner, I call him my survival partner now. He thinks it’s not romantic, but I learned that it is,” the singer told radio host Howard Stern in a recent interview. “That is why you pair up with someone, for survival, and he was so incredible. He got all the animals out [from our house] in his truck.”