Vegan Queen Miley Cyrus showed off her first vegan tattoo earlier this year, but following a tofurky-stuffed holiday weekend, she’s inked herself again with some words of wisdom.

Miley took to instagram to reveal her new tattoos which read ‘BE KIND’ on the front of her wrists.

The star was tattooed in her own bedroom, where she then picked up the needle herself to tattoo the artist responsible for her latest addition. Pictures of the star inking her tattoo artist appeared on her social media, where she warned fellow vegan and known tattoo artist Kat Von D to ‘watchout.’ 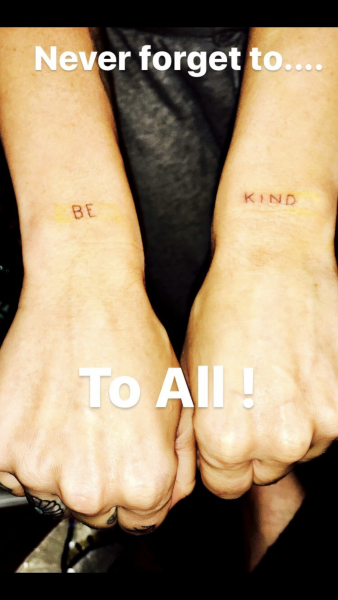 In the instagram post revealing her new body art, she reminded her followers ‘Never forget to BE KIND To All!’

The star got her first vegan themed tattoo in June of this year when she got The Vegan Society Approved stamp tattooed on her upper arm.

On Thursday the musician’s social media blew up after she revealed her tofurky baby from indulging at her family’s Thanksgiving celebrations. Fans mistakenly believed the star was pregnant but she assured everyone that her baby was nothing but a product of overeating.

Miley’s new tattoo is a sentiment the team at LIVEKINDLY can get behind, and serves as a good reminder to show everyone a little kindness especially during the holiday season.