The 26-year-old singer teased the collaboration earlier today on Instagram, posting a photo of herself with a cake decorated with “Abortion is Healthcare.” Hours later, she revealed the hoodie.

The limited-edition pink sweatshirt features a photo of Cyrus on the front with the text “Don’t F❤️ ck With My Freedom.” “The Charity Hoodie Marc Jacobs” is printed on the sleeves and the back reads “Miley Cyrus x Marc Jacobs” and “Happy Hippie Foundation,” Cyrus’s nonprofit benefiting homeless youth, LGBTQ youth, and other vulnerable populations.

This isn’t the first time Cyrus, who is oft vocal about social causes, worked with Marc Jacobs to benefit Planned Parenthood. Elle reports that the “She Is Coming” artist teamed up with the clothing label in 2016 on a series of 50 limited edition prints priced at $5,500 each with all proceeds going to the nonprofit. 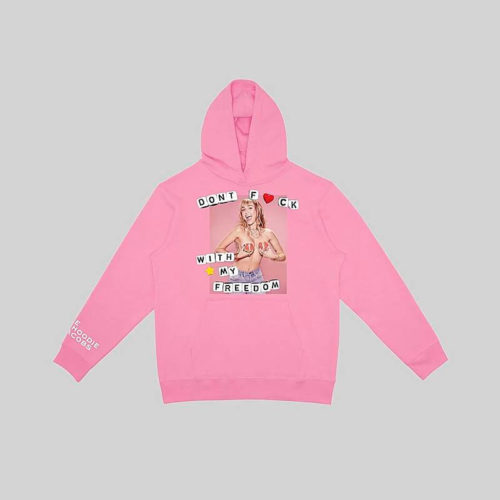 Why Is Miley Standing Up for Abortion?

Access to safe, legal abortion is under attack by politicians in Alabama, Arkansas, Georgia, Kentucky, Mississippi, Missouri, Ohio, and Utah. Some states such as Georgia and Missouri seek to pass draconian “heartbeat bills,” legislation that restricts abortion as soon as a “fetal heartbeat” is detected, typically around six weeks.

It’s been argued that such laws would effectively end abortion in those states, as most individuals don’t realize they are pregnant until after six weeks. Dr. Saima Aftab, medical director of the Fetal Care Center at Nicklaus Children’s Hospital in Miami, told Live Science, the “fetal heartbeat” is not a human heart, but an inaudible cluster of cells that will eventually become the heart.

Time Magazine notes that since a series o conservative appointments to the Supreme Court, many states are possibly looking overturn the landmark Roe v. Wade ruling that deemed restrictive ruling against abortion unconstitutional.

According to CNN, Alabama state Representative Terry Collins put it bluntly after legislators voted on the bill last month: “This bill is about challenging Roe v. Wade and protecting the lives of the unborn, because an unborn baby is a person who deserves love and protection.”