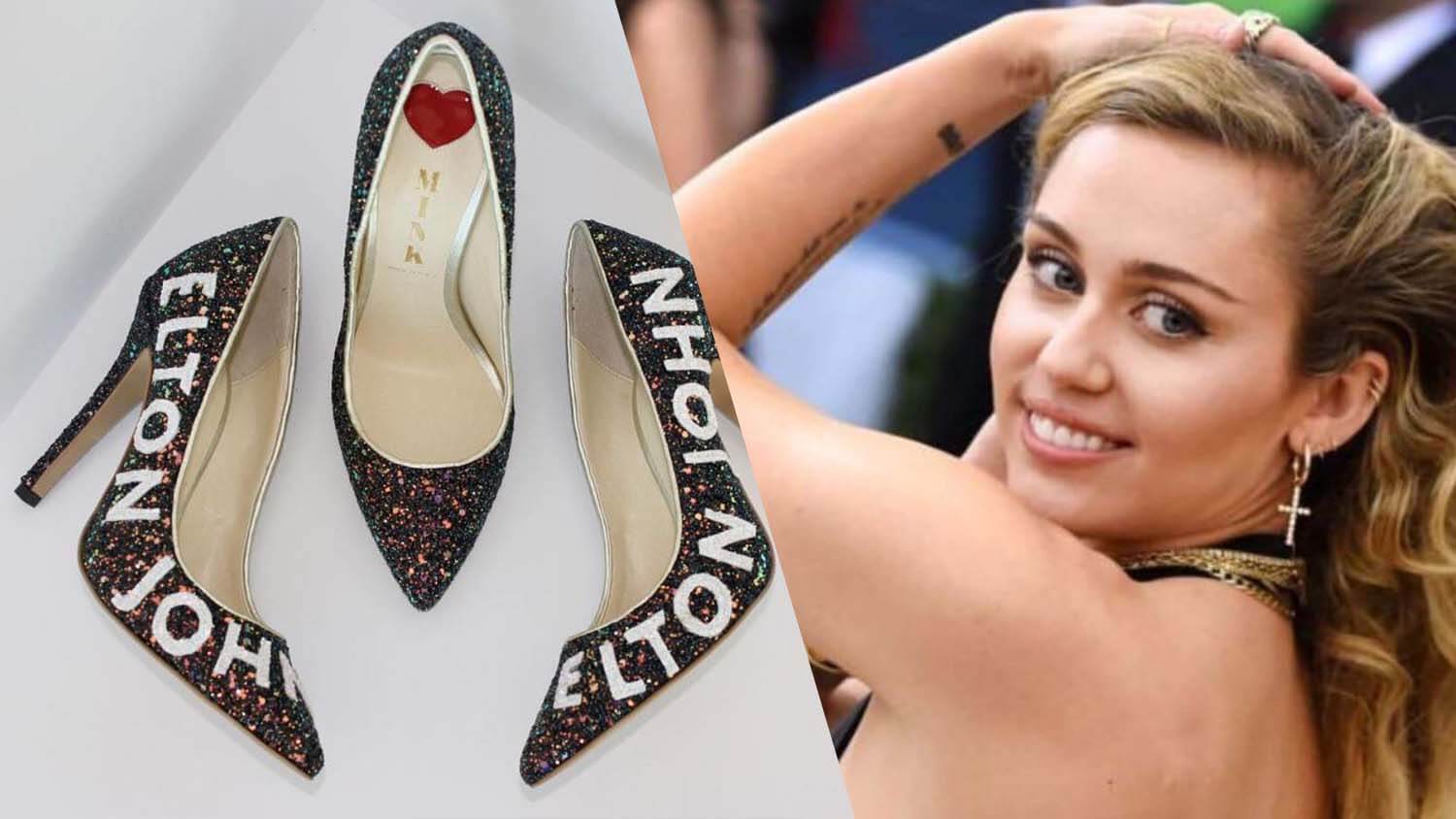 Cruelty-free shoe brand MINK has created a pair of vegan stilettos for musician and activist Miley Cyrus. The glittery heels are emblazoned with singer Sir Elton John’s name and a heart in the instep.

Cyrus performed with John at the 60th Grammy’s award show earlier this year in one of the evening’s highlights. They shared the stage for John’s 1971 classic, “Tiny Dancer.”

After their Grammy performance, Cyrus Tweeted: “Sir Elton John, I can’t thank you enough for giving me the honor of performing with you tonight at The Grammys! I’ve loved every moment I’ve spent with you over the years & will cherish each second of your kindness. let’s kick ass and keep fighting for an end to the AIDS epidemic!”

John is currently on his final 300+ show “Farewell Yellow Brick Road Tour” set to conclude his live performances in 2021 before he retires. Cyrus also appears on a John tribute albums “Revamp” and “Restoration.”

Founded by stylist and animal rights advocate Rebecca Mink, the custom couture brand’s vegan and sustainable shoes are made with high-performance materials. Cyrus is a fan of the brand’s designs, which are made in an Italian factory by 4th generation footwear masters, who also create shoes for Chanel, Gucci, Jimmy Choo, Dolce and Gabbana, and Christian Louboutin.

Speaking to reporters at the event, Cyrus, who was also wearing a vegan Stella McCartney gown, revealed she had attended the ball in order to show off vegan fashion. “I think this moment can be about so many different things,” she explained. “For me, I want to bring a message, which is veganism and that there doesn’t have to be torture in fabulous fashion.”

Cyrus isn’t MINK’s only celebrity supporter. Fellow vegan actor and activist Pamela Anderson is also a fan of the brand, wearing the brand’s shoes for an appearance on the chat show Megyn Kelly TODAY earlier this year. “[Mink] is my friend,” she told Kelly. “She wanted to make vegan shoes. She started making 10 or 20 pairs of shoes for her friends. Now, she’s so popular. She can make any shoe you want vegan. I have a lot of vegan products and you’d never know the difference.”

But MINK shoes aren’t just for celebrities. Earlier this year, the brand announced that its vegan couture products would soon be available online to customers around the world. “MINK shoes has grown from an unprecedented concept to an industry standard,” notes the company’s website. “Creative, quality and gorgeous luxury vegan shoes are possible. Soon you will be able to design your very own made to order MINK’s worldwide.”