This month, the Berkeley, California-based company will be conducting curbside taste-tests of its lab-grown Mission Bacon. The weeklong trial will take place outside of restaurants in Oakland and San Francisco in mid-August.

Those interested in testing the new bacon can apply to be a taste-tester via the company’s website. Mission Barns says it’s looking for “bacon lovers, experts, and aficionados” to try out the cultured meat.

“We definitely are looking for a diverse set of folks in terms of palates and backgrounds,” Eitan Fischer, the company’s CEO and co-founder, told Forbes.

Although the tasting is free, participants will be asked to provide detailed feedback on the bacon. 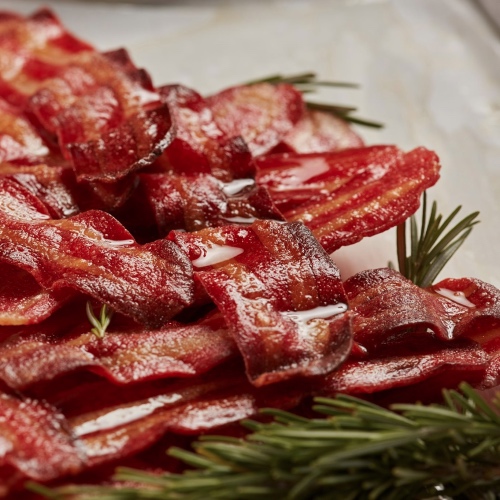 The company will be conducting taste-tests of its lab-grown bacon this month. | Mission Barns

Mission Barns’ lab-grown bacon is identical to animal meat. However, no animals had to be slaughtered in order to make it.

The company produces its cultured meat by combining lab-grown fat with plant-based protein. Although the bacon is made from pork cells, Mission Barns is able to create cultured meat and fat from several animals, such as ducks.

The cell-based meat is produced in a lab by in vitro cultivation of animal cells.

“In addition to products like bacon, our cultivated animal fat can be used in other applications ranging from food products to high-end cosmetics, with even a small amount of fat able to transform the function, flavor, and mouthfeel of an otherwise animal-free product,” Fischer told FoodNavigator-USA.

In order to make Mission Bacon, the company isolates cells from a pig and place them in a warm cultivator, which imitates a real animal’s body. The cells are able to grow naturally—similar to how they would in an actual animal.

The company then feeds the cells vital nutrients—such as proteins, vitamins, and sugars. And once the cells are fattened up, the process is complete and Mission Barns can harvest the meat.