CEO and founder of Miyoko’s Kitchen, Miyoko Schinner, took to Facebook today in a livestream of herself getting a vegan tattoo. The entrepreneur, who has been nicknamed the ‘Queen of Vegan Cheese’, branded herself with the company’s new tagline, “Phenomenally Vegan.”

The announcement was made on Instagram yesterday, encouraging the brand’s almost 70,000 fans to not only tune in and watch the stream, but to “join the movement.” Fans can get involved by showing support on Facebook, sporting a temporary ‘Phenomenally Vegan’ tattoo, or for those brave enough, opting for the real thing.

The meaning behind the tattoo is more than just an enthusiastic phrase. Miyoko’s Kitchen has a mission to be “phenomenally vegan”, believing that is how world changes occur. The business state that “Phenomenally Vegan” stands for kindness, uncompromising quality, the ethical treatment of all animals, as well as a “radically new standard for vegan cuisine.”

“It’s the new gold standard for the future of food that emphasizes artistry, integrity, ethics and conviviality,” the website reads. “It’s the credo that drives everything we do from the creation of our products to inspiring others to try this phenomenal lifestyle.”

Since launching in 2013, Miyoko’s Kitchen has become a favorite for cheese-loving foodies around America. The company’s artisanal cheeses are all free from dairy and are made using non-GMO ingredients. Without compromising taste, the products contain no cholesterol and are said to be better for you, drawing in a wider audience of health-conscious consumers. 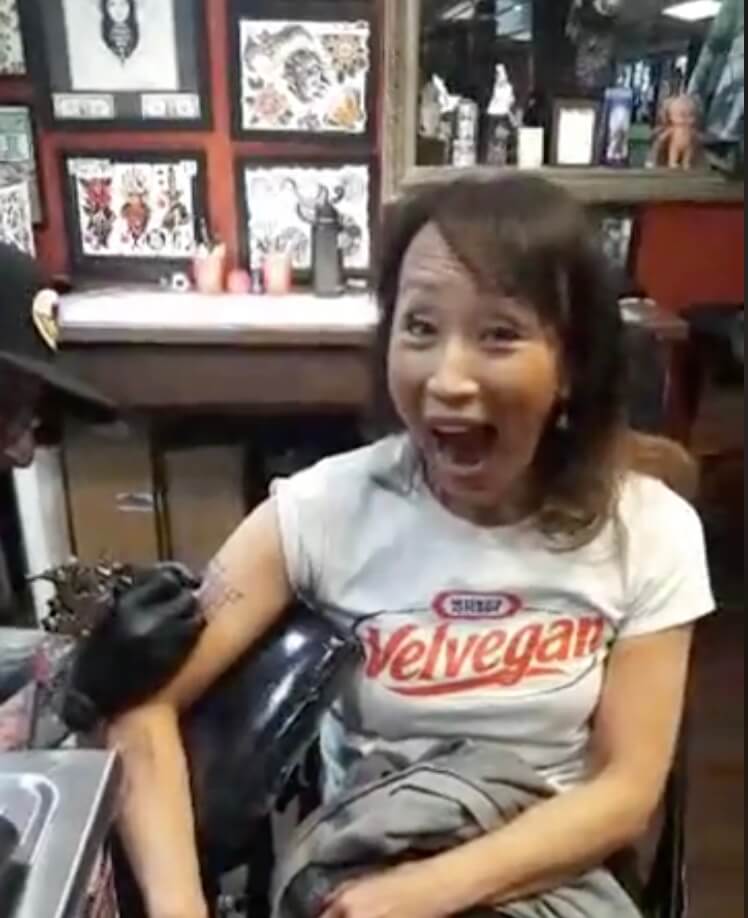 Most recently, Miyoko’s Kitchen teamed up with subscription service Vegan Wines. The collaboration sees the classic combination of wine and cheese available for home delivery in 46 states across America. The new partnership will feature only vegan products.

Miyoko previously revealed her business is experiencing rapid growth. And she says she is confident that artisanal vegan cheese will be mainstream in just a few years’ time.