Miyoko’s Kitchen, a vegan company that specializes in making plant-based cheeses, is taking their commitment to protecting the planet a step further by opting for eco-friendly packaging for their butter.

In an announcement, the company revealed that its vegan European-Style Cultured Butter will now be wrapped in eco-friendly vegan wax paper rather than plastic vacuum packaging and be sold in a box rather than a sleeve. Both the vegan wax paper and the box will be recyclable.

“We are always striving to be as eco-friendly as possible, and this is one of many steps we will take to move forward in our mission to be kinder to our planet,” the company said. 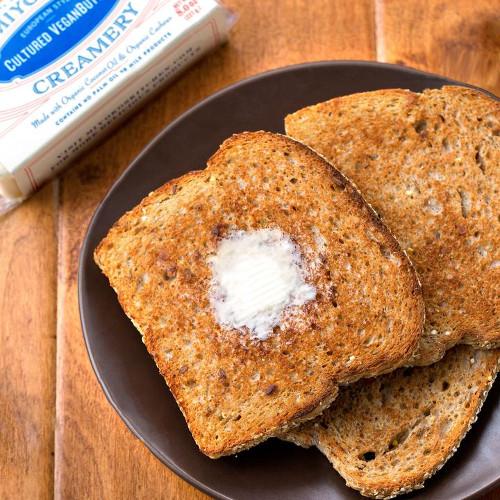 Miyoko’s Kitchen are already doing the planet a big favor by making cheeses and butter from plant-based ingredients rather than environmentally-destructive dairy. The decision to ditch plastic packaging in one product truly speaks to the company’s commitment to being eco-friendly.

Plastic pollution is one of the biggest issues facing modern society. According to recent data, 91 percent of plastics are not recycled but are instead sent to landfills. This contributes to the 8 million tons of plastic that is dumped into the world’s oceans each year. In fact, current knowledge shows that there are currently 51 trillion microplastic particles — plastic debris that is about the size of a sesame seed — in the ocean. This is 500 times more than the number of stars in the Milky Way galaxy.

Plastic pollution is particularly devastating for marine life. Hundreds of thousands of turtles, whales, and other marine mammals, as well as one million seabirds, die each year as a result of plastic ingestion or entanglement. At the rate that plastic pollution ends up in our ocean, experts estimate that by 2050, there will be more plastic than fish in the ocean.

Many countries now realize the impact of single-use plastics on the environment and have begun taking steps towards reducing plastic pollution. Recent legislation in the United Kingdom has led to the ban of single-use plastic straws from bars, restaurants, grocery stores, and more. Taiwan has also taken similar action. According to the country’s Environmental Protection Agency, all single-use plastics will be phased out by 2030.