Grilled cheese, cheese toastie, cheese melt, cheese on toast, whatever you decide to call it, nothing beats the combination of melted cheese and warm crispy bread. It’s a pairing that’s loved the world over. In America, it’s loved so much, it even has its own day (National Grilled Cheese Day falls on April 12). For decades, the iconic grilled cheese has pretty much always featured dairy. But now, the traditional filling has some serious competition, because the vegan cheese market is growing.

According to a recent report, the vegan cheese market could reach a global value of $3.9 billion by 2024. Dairy, on the other hand, is in decline.

More than 3,200 of America’s dairy farms closed in 2019. In Wisconsin, the leading state for dairy production in the U.S, two farms go out of business every day. Dean Foods, America’s biggest dairy producer, filed for bankruptcy last year. A few months later, it was followed by Borden Dairy Co., a 164-year-old dairy producer based in Dallas. 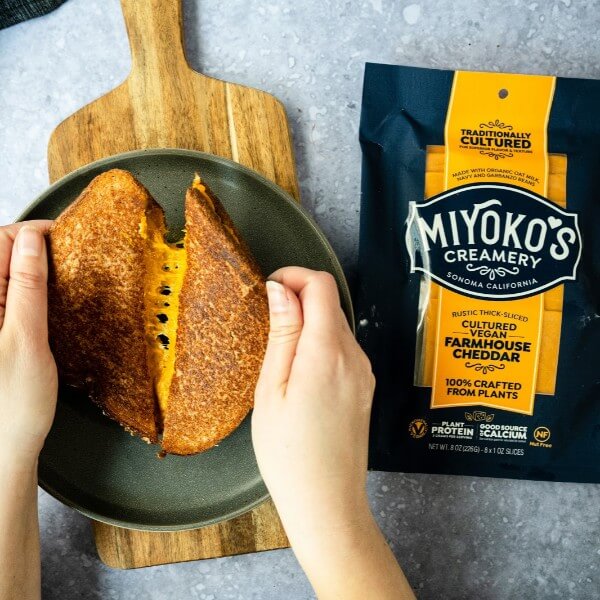 Upgrade your grilled cheese with Miyoko’s.

In the dairy industry, calves are separated from their mothers at only a few days old. The practice has been widely condemned by animal rights activists.

Then there’s the environmental impact. Global livestock production emits 14.5 percent of the world’s annual greenhouse gas emissions. Dairy production also uses significant amounts of water and land. There are health risks, too. Studies have linked dairy consumption with a higher risk of serious health conditions including heart disease and cancer. 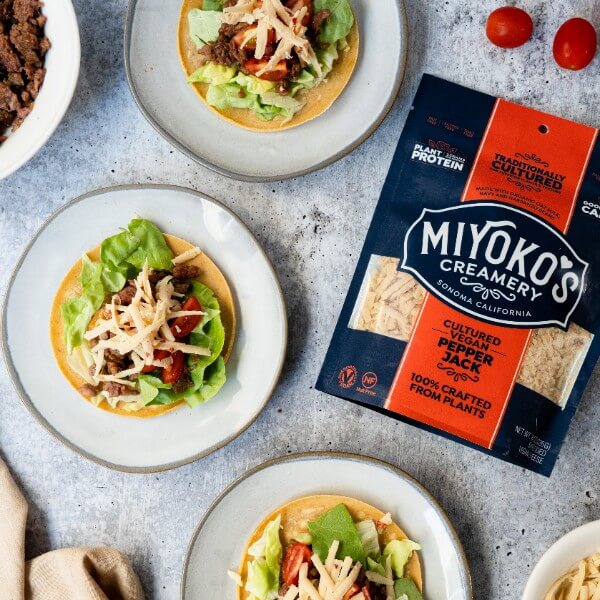 Add Miyoko’s Pepper Jack cheese to any recipe that would usually feature dairy, like fajitas.

Its meltability and authentic texture is not just a fluke—there’s actually a science behind it. Miyoko’s ferments whole foods with specific cultures to create its signature product. This results in a robust and complex flavor profile, just like that of traditional dairy cheese.

The brand offers a range of products, including vegan mozzarella and cream cheese. Its vegan cheese wheel range includes everything from Garlic Herb cheese to Black Ash. But its latest product, Cheddar and Pepper Jack, will make you really up your grilled cheese game.

To create Cheddar and Pepper Jack, Miyoko’s uses a base of oat milk, organic navy beans, and organic garbanzo beans. Next, it adds cultures and allows the milk to ferment until it “reaches desired target pH levels and flavor profile.” To get the right texture and flavor, the final step in the process is adding coconut oil, potato, tapioca, and organic chiles.

The result? A tasty, melty vegan cheese that means you won’t crave dairy. If grilled cheese isn’t your thing, add it to pastas, quesadillas, enchiladas, or basically any recipe where you would use traditional dairy-based cheese. 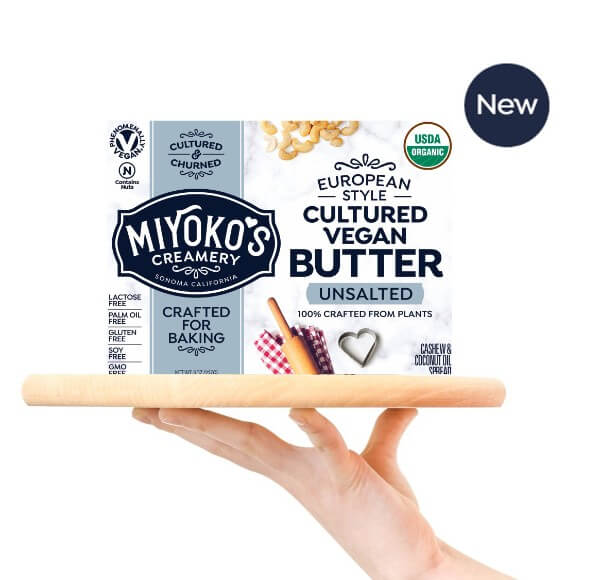 Cheese is kind of Miyoko’s thing. But that doesn’t mean the brand’s talents are limited to just one product. It also makes European Style Cultured Vegan Butter, and it’s launching Spreadable Oat Milk Butter too. In true Miyoko’s fashion, it’s the first in the world to do so.

Available in two flavors–Hint of Sea Salt and Garlic Palm–the new oat-based products are “unlike any other vegan butter on the market,” the brand boasts.

Just like with its dairy-free cheese, there’s a delicate process to making Miyoko’s vegan butter. The recipe calls for a unique combination of cultures. These promote fermentation, creating more complex flavors. No other vegan butter brand makes its product in this way, so it’s completely unique to Miyoko’s.

First, oats are blended together with water, creating an oat milk. Next, cultures are added and the mixture is fermented. Finally, it’s churned with coconut and sunflower oils until it achieves its authentically buttery creamy texture.

When do you use it? Anywhere you would use ordinary butter. Add it to your grilled cheese if you like, melt onto pancakes, spread in your sandwiches, or add it to the pan before you cook. 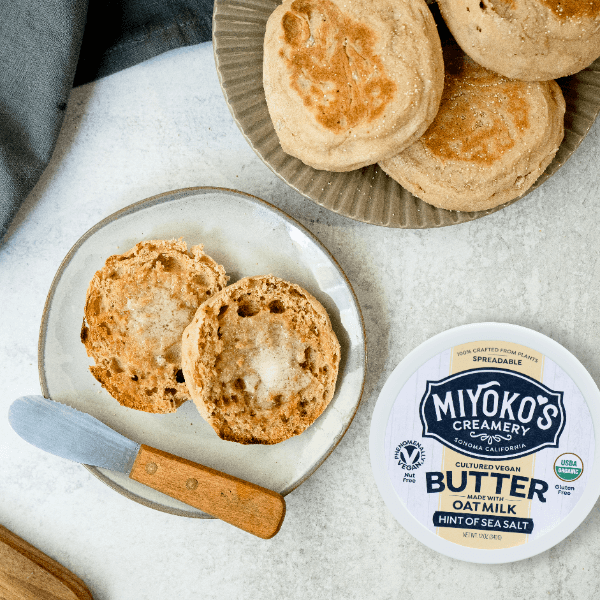 Creating a New Future of Food

The happy consequence of all of this vegan food technology? A healthier, more sustainable way of eating, which is also kind to animals.

In just six years, the brand has gone from making its products in Schninner’s kitchen to churning them out of a 30,000 square foot start-of-the-art facility in Sonoma. Now, its vegan cheese wheels, spreads, and slices are available in thousands of stores across the United States.

“Farmers are struggling, farms are closing, livelihoods are threatened, and we want to help the American farmer stay true to the land. We can’t truly move to a compassionate food supply without the support and participation of the farming community,” Schinner said in a statement. “They are integral to our ability to eliminate animal agriculture and lead us to a compassionate and sustainable food supply.”

Who knows what the future of food holds, but if it’s down to Miyoko’s? It’s filled with happy animals, a greener food supply, and a lot more vegan grilled cheeses in your belly.