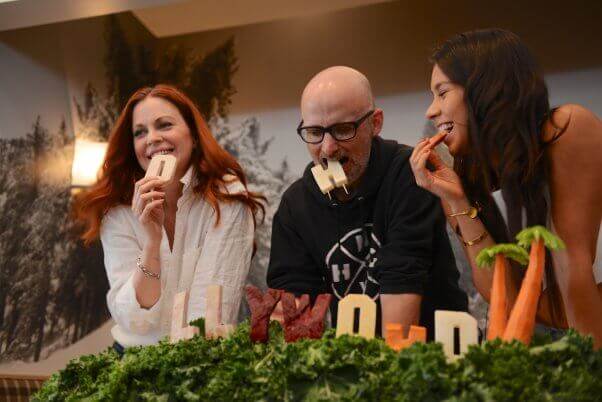 It’s official. Los Angeles is the “Most Vegan-Friendly City” in the U.S. according to animal rights group PETA (People for the Ethical Treatment of Animals).

“The City of Angels is vegan heaven—it’s no wonder that vegan celebs Natalie Portman, Jessica Chastain, Liam Hemsworth, Miley Cyrus, and many others call La La Land home,” PETA said in its official announcement. “The city is also home to an impressive array of eateries for every occasion and every craving.”

Those eateries include Moby’s popular Little Pine restaurant in the trendy Silver Lake neighborhood. Little Pine will host a reception today as the vegan musician officiates the crowning ceremony.

“Los Angeles has now been named the vegan capital of the world, and I’m proud to live here because there is vegan food galore!”  Moby said in a statement. “What led me to adopt a vegan lifestyle is simply that I love animals and don’t want to contribute to their suffering in any way.”

The ceremony will feature a replica of the Hollywood sign made entirely out of vegetables by chef Ray Duey.

Los Angeles is home to numerous vegan restaurants including the award-winning celebrity favorite, Crossroads, helmed by chef Tal Ronnen; popular Mexican-inspired cuisine at Gracias Madre; modern classics at Sage Vegan Bistro; vegan sushi at Shojin; and the Grand Central Market favorite, Ramen Hood. The city also boasts numerous vegan-friendly joints like Mohawk Bend, Elf Cafe, Kitchen Mouse, and Trejo’s Tacos. LA is perhaps best-known though for its vegan food trucks and pop-ups. Whether the line snaking around Cena Vegan, Plant Food for People, Senoreata, or the Word of Mouth truck, there’s vegan food in nearly every neighborhood, seven nights a week. Desserts, too: from the vegan donuts at Donut Farm and Donut Friend to vegan ice cream at Magpies, Cocobella, and fro-yo from Yoga-Urt, to name a few.

The city’s love for vegan eats is punctuated by its numerous vegan festivals. From Vegan Street Fair to VegFest to the ever-popular Eat Drink Vegan festival taking place over Memorial Day weekend, interest in the vegan food scene in LA has never been higher.

“Most Angelenos know that you can also help the planet by reducing your carbon footprint and lower your risk of developing heart disease, diabetes, cancer, and so many other health issues by eating this way,” Moby said. “Vegan eating is really a magic bullet that solves so many of today’s problems in one bite.”