Four years ago, Harley Quinn Smith — 16-years-old at the time — already had a few credits to her name. She made her first cameo in 2001’s “Jay and Silent Bob Strike Back,” playing the baby version of titular character Silent Bob, played by her father, filmmaker Kevin Smith. In 2019, she starred in “Jay and Silent Bob Reboot” as Millennium “Milly” Faulken, Jay’s estranged daughter and a member of a girl gang. It came out just months after she played a member of the Manson family in Quentin Tarantino’s “Once Upon a Time in Hollywood.” She recently finished shooting a project in Dallas, which Smith says has “amazing vegan food.”

Being vegan on set is “definitely difficult when you’re shooting outside of Los Angeles,” Smith tells LIVEKINDLY. But, times are changing. She discovered the Spiral Diner in Dallas. Smith adds that she’s excited about the other vegan restaurants that she discovered and gave a shoutout to some of her favorites, including Champ’s Diner in Brooklyn. Both restaurants have something in common: they specialize in vegan comfort food.

Smith praised the Spiral Diner’s Frito pie (via the menu: “nacho cheese, Texas red chili, and French fried onions on real Fritos.“). And Champs, located in Brooklyn’s Bushwick neighborhood, is one of those restaurants where New Yorkers don’t mind the sometimes two-hour wait for weekend brunch. Think vegan chicken and waffles, platters packed with pancakes, tofu scramble, breakfast sausages, and seitan bacon. “Healthy” salads and bowls are an afterthought. Smith says she tries to go to Champs any time she’s in the city. 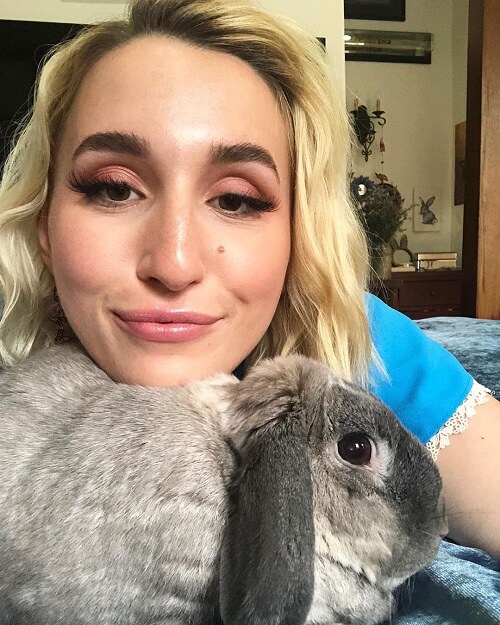 The Power of Compassion

The New Jersey native was always an animal lover. Smith recalled her childhood self — circa “before the times of Instagram” — feeling compassion for elephants and other African animals victimized by poaching.

“And I never made the connection between my love for animals and the fact that I was contributing to cruelty,” says Smith, referring to how she would stick up for animals even before she went vegan. She adds, “It was just not something that had clicked in my mind yet.”

Her pet rabbit, a rescue named Cinnamon Bun, was who inspired Smith to go vegan after seeing how compassion can help traumatized animals heal. “She was in a really terrible condition when I adopted her,” says Smith. Cinnamon Bun was surrendered to the shelter after growing up in a hoarding situation with around 100 other rabbits.

“She was pretty traumatized and abused,” Smith adds. The rescued rabbit had a ripped ear, metal stitches that needed tending, and she was covered in urine. On top of that, her new rescued rabbit was terrified of humans. “For about two months after I adopted her, she wouldn’t let me touch her” says Smith.

But, Smith was patient with Cinnamon Bun, allowing her the time and space to understand that she was somewhere safe. Eventually, Cinnamon Bun “became this really, really loving little creature with the biggest personality. After that, we just became best friends and after seeing her transition from this very scared, timid creature that I first met to this very open, loving, crazy creature who came about a few months later, I was like ‘whoah, human compassion can really change an animal.’”

After that, Smith says she needed to make a change. To her, it “would be very hypocritical to continue living my life in a way that contributed to animal cruelty when I saw firsthand what human compassion can do to an animal.” 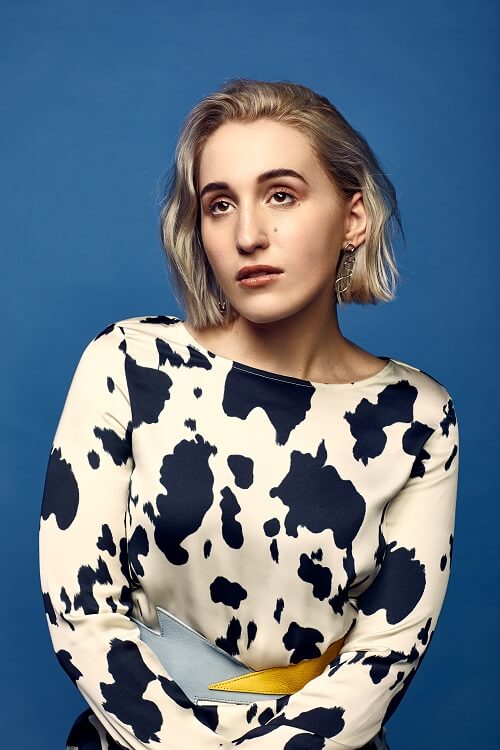 Since going vegan, Smith has worked with various nonprofits to spread messages she believes in. In 2018, she, her father, and rescued turkeys starred in a Farm Sanctuary advert encouraging a vegan Thanksgiving dinner. Smith also appeared in a 2018 PETA (People for the Ethical Treatment of Animals) campaign about ditching fur, leather, and wool. The 20-year-old wants others to realize how similar animals are to animals, especially those raised for food and fashion.

“You know, there’s this really bizarre assumption that I never understood that farm animals can’t feel, which is the furthest thing from the truth. They can feel everything that humans can feel,” says Smith. She also hopes that more people will understand that there’s “no humane way to get an animal product.”

But, she also acknowledges that the majority of people weren’t raised to view farm animals with compassion and respect.

Looking ahead, Smith is set to appear in “Student Body,” a horror film about high school friendship. She’ll also play a role in “Killroy Was Here,” an upcoming horror anthology directed by Kevin Smith. Being vegan on set has had its challenges (“because you’re in this unfamiliar area and you’re working”), she says. But, it’s not impossible. “You just have to trust that the people you’re working with are going to take care of you,” says Smith.