In an effort to promote ocean sustainability and environmental stewardship, the Monterey Bay Aquarium just partnered with New Wave Foods to serve vegan shrimp at its visitor cafe. The plant-based seafood is featured on the cafe’s Sustainable Catch Menu, making it by far the most sustainable seafood option.

Dominique Barnes, the CEO of New Wave Foods, claims, “Shrimp can be or (has) the highest bycatch ratio of any wild-caught seafood items. So for every body of shrimp that comes up you can get up to five or six pounds of other animals that often get discarded overboard.”

When Barnes realized that the Monterey Bay Aquarium offered shrimp in its cafe, she took action. Barnes met with aquarium executives and successfully convinced them to replace the cafe’s animal-based shrimp with New Wave’s plant-based shrimp. By eliminating this unsustainable seafood option and replacing it with a sustainable, vegan alternative, the aquarium can better uphold its mission of promoting ocean sustainability and conservation. Visitors can now enjoy a vegan Sweet Chili Shrimp Burrito filled with crispy New Wave Shrimp, guacamole, rice, coleslaw, and cilantro. 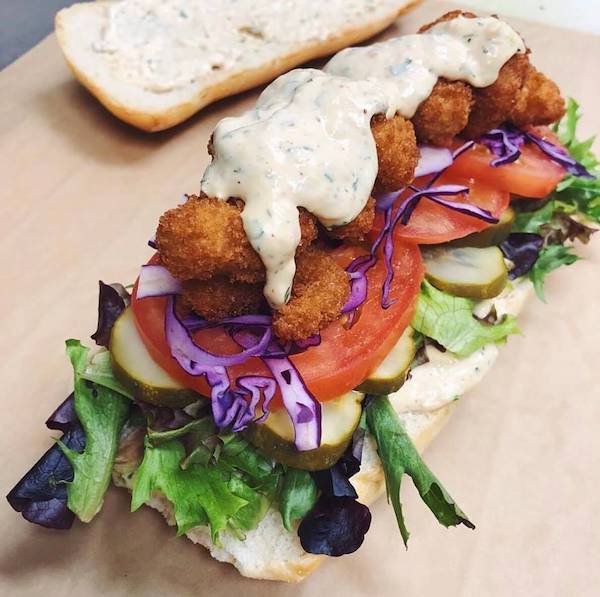 New Wave Foods is a young biotech company on a mission to promote ocean sustainability by developing plant-based alternatives to seafood. The vegan, algae-based shrimp is the first New Wave product and has recently become available in select markets. Chefs have used it to recreate plant-based po’ boys, shrimp salads, stir-frys, and more. In addition to the Monterey Bay Aquarium Cafe, consumers can find New Wave Shrimp at the Calafia Cafe in Palo Alto, Calif., Orchard Grocer in New York City, and online through Veestro, a vegan meal delivery service. The company is actively working to expand its distribution in restaurants and markets across the US. Companies like New Wave are working to change the accepted notion of “sustainable seafood” by educating both consumers and the corporate world about truly sustainable, plant-based alternatives.

While this partnership with New Wave represents progress, the aquarium is far from animal-friendly. Although the facility focuses on visitor education as opposed to pure entertainment, it still houses sea life in an unnatural environment, and it also supports consuming seafood under the “sustainably caught” label, despite the high incidence of fish fraud, bycatch, and cruelty inherent in the fishing industry. Recent studies have shown that fish are capable of feeling, not just pain, but other emotions as well. Further, aquariums and other animal entertainment venues, such as SeaWorld, are experiencing drastic declines in visitorship as consumers realize the inhumane practices that can occur in such facilities.