The new range was announced earlier this month and features soy protein-based vegan burgers, chicken tenders, and nuggets. The launch will mark the first time that MorningStar products are available in the UK since the company started in 1975.

According to Sean Cahillane, CEO of MorningStar’s parent company, Kellogg, the new burger will “sear wonderfully,” similar to the realistic Beyond and Impossible Burgers. The new range will launch in the US market in early 2020. According to The Grocer, the company is evaluating a global expansion in addition to the UK.

Mel Cash, head of Kellogg’s plant-based protein division, told Forbes that the new range delivers on consumer demand. “It’s less about having a competitive advantage and more about being able to satisfy as many people as possible who want to eat plant-based,” he said. 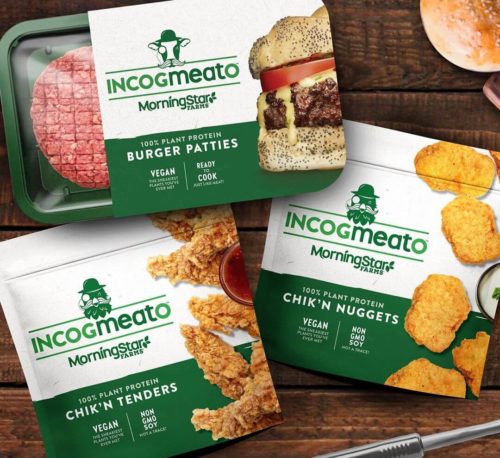 Like Tofurky, MorningStar is an old school meat-free brand — but it wasn’t always vegan. Last March, the vegetarian brand announced that it would eliminate eggs from its product lineup by 2021.

Last March, Cash explained that the company would first assess if it could reformulate its products without risking taste or texture. “If we feel like we can’t get there with renovation, it could look more like innovation,” he added. The new Incogmeato chicken products will be an upgrade of its existing meatless nuggets and tenders.

The switch came as a result of increased demand for vegan food. In MorningStar’s home country, the US, the vegan meat market is worth $800 million, according to SPINS data. It is also the top-selling meat-free brand in the country, earning approximately $450 million a year.

Nielsen data shows that the UK launched more vegan products than any other nation last year, representing one in six new products. North American vegan meat brands have honed in on the UK market as a lucrative opportunity. Both Gardein and Beyond Meat made their UK debut in 2018.

A UK launch date for MorningStar’s Incogmeato range has not yet been announced.