The new festive food options include the ultimate Christmas dinner staple: vegan pigs in blankets. Unlike the traditional version — which features pork sausages wrapped in bacon — Morrisons’ bites are made with jackfruit and chickpea sausages, which are wrapped in streaky pastry.

If you want to stray from tradition, the supermarket chain is also launching katsu croquettes. The croquettes are packed with sweet potato, carrots, and red peppers in katsu sauce. Korean Jackfruit Bao Buns are also on offer. If you want to try out some new flavors this Christmas, steam the buns at home and add pulled jackfruit and BBQ sauce.

For the main event, customers can opt for the Vegetable Layered Tart. The tart is filled with festive veggies and topped with roasted chestnuts. The dish took home the title of the best Christmas Vegetarian Main in the BBC Food’s annual blind taste test. The BBC panel credited the dish’s flaky and “buttery” puff pastry and layers of spiced beetroot, butternut squash, spinach, cranberries, and onion chutney for the win.

Amy Phizacklea, Product Development Manager at Morrisons, said in a statement, “We wanted to take all the classic flavours of Christmas and make the ultimate main dish that vegans, vegetarians and those that don’t fancy meat can enjoy. Customers shouldn’t miss out on delicious dishes because of their dietary choices and with this tart they don’t have to.”
Morrisons has added a number of vegan options to its shelves recently; it now sells vegan pulled chicken, vegan marshmallows, and vegan BLT sandwiches among a number of other plant-based options. 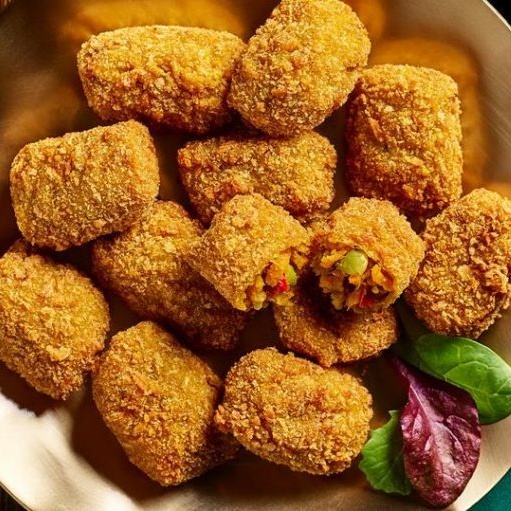 Vegan food is becoming more popular in the UK. According to a recent study, more than two million Brits now regularly have meat-free days. In 2018, Brits ate 150 million more meat-free dinners than 2017, according to a Kantar Worldpanel survey.

“One of the most notable consumer trends is the shift to a more plant-based diet,” said Fraser McKevitt — the head of retail and consumer insights at Kantar Worldpanel — earlier this year.

He added, “today, [one percent] of all households include a vegan, [five percent] have a vegetarian and [10 percent] have flexitarians in their ranks. This move has contributed to consumers eating a total of 4.4 billion meat-free dinners in 2018, an increase of 150 million meals on the year before.”

This year, like Morrisons, a number of supermarkets have responded to the demand for more plant-based foods.