The pastry weighs 466 grams, which is nearly four times the weight of a conventional sausage roll. It’s also double the length, earning it the name of “the Vegan Foot Long.”

The sausage roll includes seasoned soya mince. The pastry’s edge has the word “vegan” imprinted on it several times down the side.

“Our original foot long sausage roll caught the imagination of the nation so we’ve worked hard to make sure everyone – including vegans – can now tuck into our creation,” Morrisons Pie Expert Steven Halford said in a statement. “Sharing is optional.” 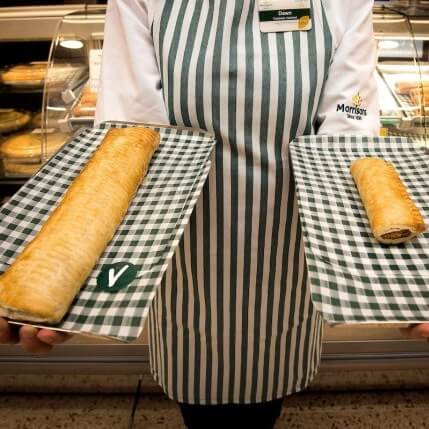 The Vegan Foot Long is twice the size of competitor sausage rolls. | Morrisons

In January, the UK’s largest bakery chain Greggs introduced its first vegan sausage roll. The product is made with Quorn meat, vegetable oil, and 96 layers of vegan puff pastry. It has 12 grams of protein, whilst the meat version has just 9.4 grams.

The sausage roll quickly sold out across the country. Greggs reported its total sales had leaped up by 14.1 percent, compared to the year prior’s 2.9 percent. The vegan snack was credited for helping the bakery chain top £1 billion in sales for the first time ever.

Greggs has since revealed plans to create vegan versions of more of its popular products. CEO Roger Whiteside told the Evening Standard that “many customers are demanding more non-meat products and we want to offer more choices.”

Earlier this year, Morrisons launched a vegan “Corn-ish” pasty. It comes with plant-based mince and a traditionally seasoned mix of potato, swede, and onion. The treat features a crimped rough-puff flaky pastry.

The Vegan Foot Long sausage roll is available from Morrisons Pie Counters for £1.