While 2019 was undeniably the year of the vegan sausage roll, Morrisons may have started a new trend. The UK supermarket chain has launched the nation’s first-ever vegan pork pie.

At the beginning of the year, Greggs launched the now-iconic vegan sausage roll. After witnessing its popularity, virtually every supermarket in the country rushed to launch their own version. Earlier this month, Morrisons took things one step further by launching a footlong vegan sausage roll.

Now, just in time for Christmas, shoppers will also be able to get their hands on the vegan “No Pork” Pie from Morrisons’ in-store pie shop counters.

It’s exactly like a traditional pork pie, with crumbly pastry and a meaty taste, only it’s completely meat-free. Instead, it features vegan meat made with pea and soy protein.

“So many people across the UK are fond of eating a pork pie at Christmas,” said Steven Halford, a pie buyer for Morrisons. “Our vegan and vegetarian customers previously couldn’t enjoy a pork pie but with our new meat-free product they can enjoy a great tasting alternative.” 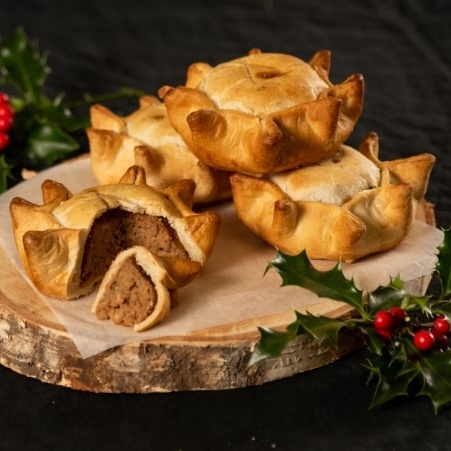 The new “No Pork” Pie isn’t the only vegan option available from Morrisons this Christmas. Earlier this year, the chain announced its new plant-based range for the festive season.

The range includes vegan pigs in blankets, which feature jackfruit and chickpea sausage bites wrapped in streaky pastry. For those who want to stray from tradition, Morrisons is also offering katsu croquettes, which are packed with sweet potato, carrots, and red pepper in katsu sauce.

“We wanted to take all the classic flavors of Christmas and make the ultimate main dish that vegans, vegetarians and those that don’t fancy meat can enjoy,” said Amy Phizacklea — a product development manager at Morrisons — in a statement.

She added, “customers shouldn’t miss out on delicious dishes because of their dietary choices and with this tart they don’t have to.”