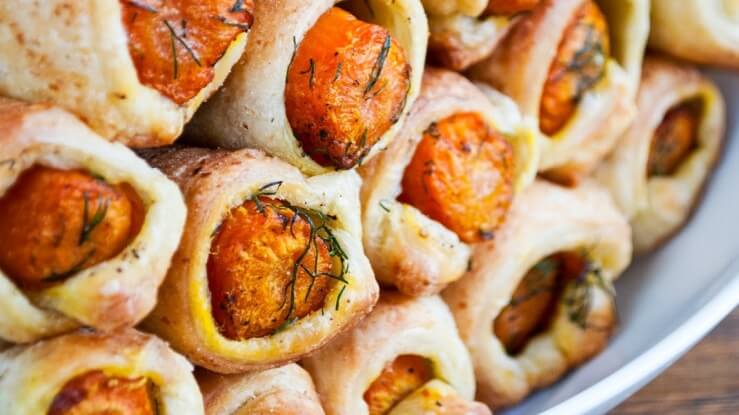 Leading UK supermarket chain Morrisons is offering a vegan version of Christmas pigs-in-blankets this year with its Veggies in Blankets.

The product features a “blend of tomato, potato, mushroom and basil” wrapped in aubergine, and offer a more sustainable and healthy alternative to pigs-in-blankets. Tesco recently found that Brits prefer Brussels sprouts to the traditional, red meat Christmas food which involves pork sausages wrapped in a layer of bacon, in line with growing demand for plant-based festive food. In light of this, Morrisons’ Veggies in Blankets are likely to be popular.

The Veggies in Blankets are part of the chain’s affordable new V Taste range. The own-brand ready meal collection also features meals including a Mushroom Bolognese, 3 Bean Chili Non-Carne, and Teriyaki Mushroom Noodles, as well as vegan cheeses and desserts.

According to The Guardian, Morrisons’ chief executive David Potts explained that the chain’s foray into plant-based dishes and explicit vegan labelling intends to improve the supermarket’s popularity and increase appeal among young consumers.

For mains, consumers can replace turkey with a Tofurky Vegan Holiday Roast, or Iceland’s No Turkey Christmas Dinner For One.

Sold in packs of ten, the Veggies in Blankets are dubbed as ideal for festive parties, and can be frozen for Christmas. The product is also intended to be accessible, priced at £2.50.

Recipes abound for the home chef as well like this one for Carrots In A Blanket featured on the website, Tuesday’s Horse.