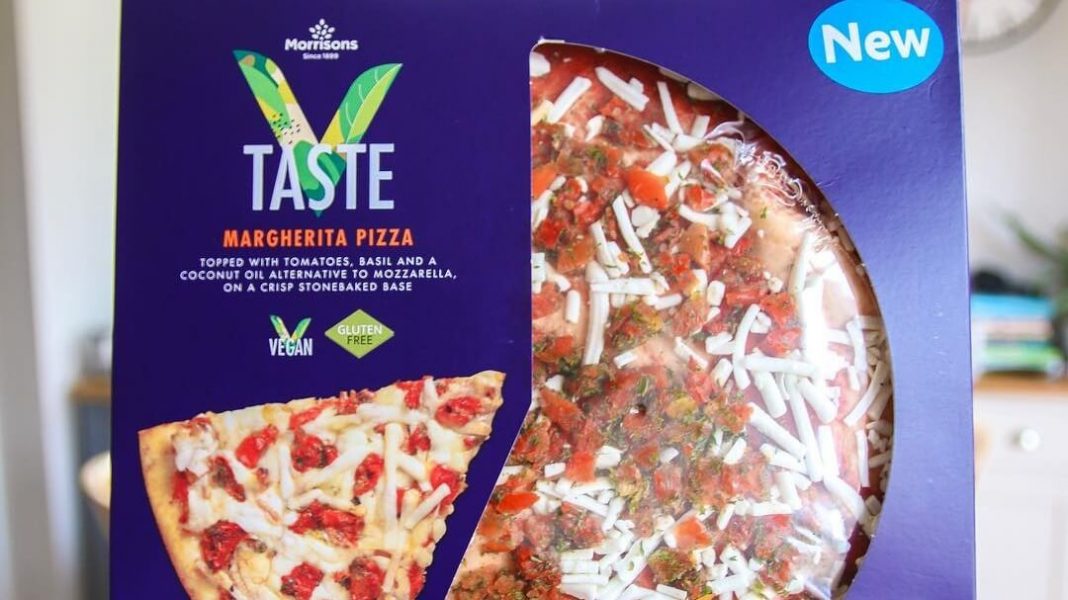 Pizza lovers in the UK won’t be going hungry any time soon. Leading supermarket chain Morrisons has launched its very own vegan Margherita pizza, adding to its growing list of plant-based options.

The tomato and basil pizza is topped with dairy-free cheese made from coconut oil and sits on a crisp stone-baked base made from gluten-free oat fibre.

The pizza by Morrisons – the fourth largest chain of supermarkets in the UK – is under its new V Taste label. Introduced late last year, the plant-based ready meal range includes dishes like Mushroom Bolognese, Sweet Potato Nut Cutlets, Teriyaki Mushroom Noodles, and vegan meat burgers and sausages. According to Vegan Food and Living, all of the ready meals are £3 or under.

V Taste was launched to cater to the growing demand for plant-based food. Alex Dodd-Jones, vegan buyer for Morrisons, said in a statement: “More and more people are eating vegan and we are listening and responding to customers who tell us that they want more vegan options. We are also making vegan food easier to find.”

Just found a new gluten free AND vegan margherita pizza in @morrisons ??? Tag someone who needs to know about this!! Hopefully this will satisfy all us folks who were slightly disappointed that the M&S pizza I posted recently wasn’t dairy free ?? It was £3 btw! Who wants to see the ingredients? Let me know and I’ll post it on my story if anyone cares! Also, this contains gluten free oat fibre… would that put you off? . Hello second paragraph FODMAP people ?? I’ve got bad news and bad news, which do you want first? The bad news? Ok, well this contains garlic. The other bad news? It has garlic in it again. Yes, actually listed twice in the ingredients ? You can only laugh, can’t you? Otherwise I’d be in a hangry rage most of my life!! Mark seems to be tolerating garlic ‘ok’ at the mo, so I’ll see if he fancies this!!

Vegan pizza fans are spoilt for choice in the UK right now; Morrisons joins a number of brands that have recently created animal-free pizzas. Fellow British supermarket chain Iceland launched two frozen pizzas as part of its “No Cheese” range – the Italian Garden which includes broccoli, mushrooms, and red onions, as well as the Houmous, which features black kale and, naturally, houmous.

Another leading supermarket chain in the UK, Waitrose, also dipped its toes into the vegan pizza market, launching a low-carb falafel pizza as well as bases made from vegetables like cauliflower and courgette.

It’s not just supermarkets getting involved. Even meat and dairy-heavy pizza chains are realizing the profitability of vegan products. Italian food chain Zizzi introduced a handful of vegan options, including a four-cheese pizza that is entirely plant-based.

And Pizza Hut UK just announced its latest plant-based dish, a dairy-free cheesy pizza topped with jackfruit. The meal is available for a limited time but will remain a permanent menu item if enough pizzas are sold. The company is confident sales will pull through due to the “overwhelmingly positive feedback” received for its previous vegan options.