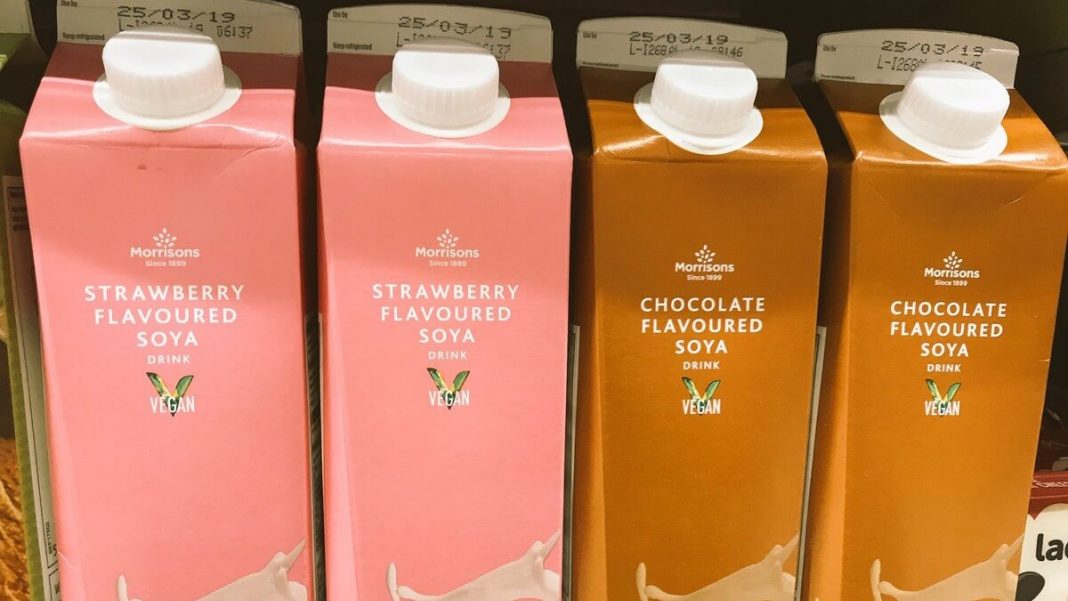 News of Morrisons’ nondairy milk range spread last week via shoppers on social media. The supermarket chain has offered vegan almond milk and shelf-stable soya milk for some time but these releases mark the first time the company has launched its own strawberry and chocolate flavours. It is also the first time that the UK’s fourth-largest supermarket chain has offered cashew milk.

Morrisons’ soya and cashew drinks are fortified with vitamins B12, B2, and D2. All four new nondairy milk options can be found in the supermarket’s chilled section.

Like supermarkets Tesco, Sainsbury’s, Asda, and Iceland, Morrisons has steadily been expanding its own-brand range to include a variety of new “free from” products. Last July, it introduced vegan parmesan from Welsh dairy-free brand Good Carma Foods. The new product joined plant-based Violife cheeses in the supermarket’s chilled section.

In September, Morrisons not only introduced vegan katsu curry “melts,” breaded cutlets made from rice and veggies, it also announced that it would launch other meat-free ready-made meals as well as more plant-based cheeses.

Morrisons is one of many supermarkets to commit to clear vegan labeling for its own-brand products, thanks to the efforts of UK charity Animal Aid’s #MarkItVegan campaign. Other chains to adopt the labeling standards include Tesco, Waitrose, Sainsbury’s, and Asda.

Marking plant-based products “vegan” does more than just save vegan customers from scanning through ingredients lists; according to a recent survey conducted by Animal Aid, 70 percent of customers, regardless of dietary preference, said that they would switch to a supermarket with clear vegan labeling.