The UK-based supermarket chain’s new vegan pizza comes topped with dairy-free Violife cheese, peppers, and barbecue pulled jackfruit. The stringy fruit — native to India but currently soaring in demand in the west — is widely acknowledged to have a texture similar to pulled pork.

“This has surprised meat-eaters and vegans with how close it tastes to its meatier counterpart. We hope that all our customers enjoy this amazing vegan pizza,” Morrisons pizza buyer Charlotte Shores said in a statement. 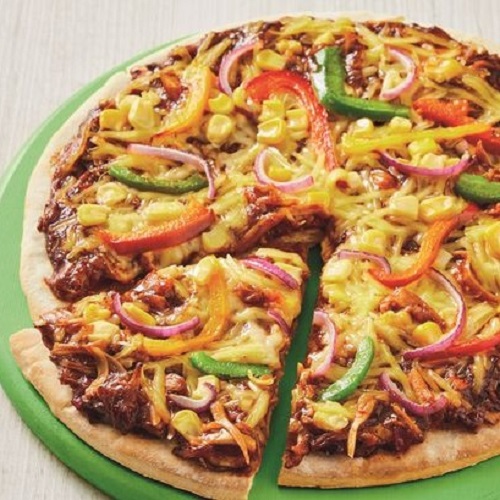 Vegan options in the UK are increasing in both supermarkets and restaurants. The nation launched more plant-based food products than any other nation last year according to Mintel data, driven by “flexitarian” diners seeking healthier options. A willingness to try new things is also playing into the plant-based boom.

“Consumers are becoming more willing than ever to expand their comfort zones, push themselves to the limit with new experiences and use social media to compete with and offer inspiration to their peers,” said Edward Bergen, global food and drinks analyst at Mintel.

Last spring and summer, vegan restaurant options increased 237 percent in the UK, according to a study by MCA Menu Tracker. Jackfruit, in particular, was cited as one of the most popular new ingredients.

Morrisons’ new 14-inch vegan pizza costs £4, about £15 cheaper than Pizza Hut’s Jack N Cheese introduced earlier this year. Like the Morrisons option, Pizza Hut’s pie is topped with marinated jackfruit, peppers, and Violife cheese. Pizza Hut launched the option in January as a Veganuary special, but it’s now part of the permanent menu due to its popularity.

“Following the overwhelmingly positive feedback and awards we’ve won for our initial vegan range in 2017, we’ve responded to demand with a third vegan pizza,” said Kathryn Austin, director of HR and marketing at Pizza Hut.