LEON has also welcomed vegan milkshakes in flavors like chocolate, strawberry, and coffee as well as a raspberry and rose donut and a vegan birthday cupcake.

“It’s our 15th birthday this summer. That means 15 years of Naturally Fast Food, 15 years of serving you and learning what your ‘regular’ is, and 15 years of finding new ways to make plants taste good,” the restaurant chain wrote on its website.

As part of this pledge, it also launched cheesy vegan Jack Wings. LEON shared images of the pulled jackfruit nuggets — which are coated in a gluten-free golden crumb — on Instagram, writing, “It’s time for veganism to take flight.” 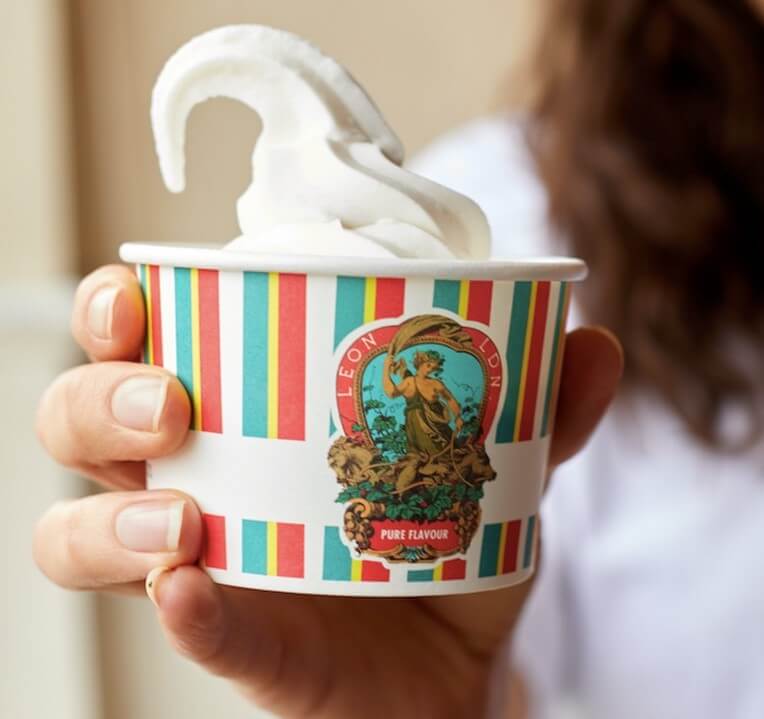 The vegan soft serve is made with coconut | image/LEON

In January 2018, 46 percent of LEON’s sales were vegetarian and 34 percent were vegan. This year, those figures rose to 64 percent and 55 percent respectively.

John Vincent, co-founder and CEO of LEON, said in a statement, “Since we opened our doors 15 years ago, we have continued to innovate, providing new and exciting ways for everyone to eat fresh, natural and seasonal food.”

“Over that time, we have constantly evolved and this latest menu shake up marks an important step for us – we know plant based eating is better for body and planet, but we want to make plant-based options the tastiest choice too,” Vincent added.

Earlier this year, LEON launched its LOVe Burger, which features a plant-based soy and beetroot patty, vegan Carolina mustard mayo, burger sauce, tomatoes, pickles, and smoked gouda-style vegan cheese. The restaurant chain advertized the burger as “what the world needs now” and said upon its launch that LEON will try to be “kinder to ourselves, to each other, and to the planet.”