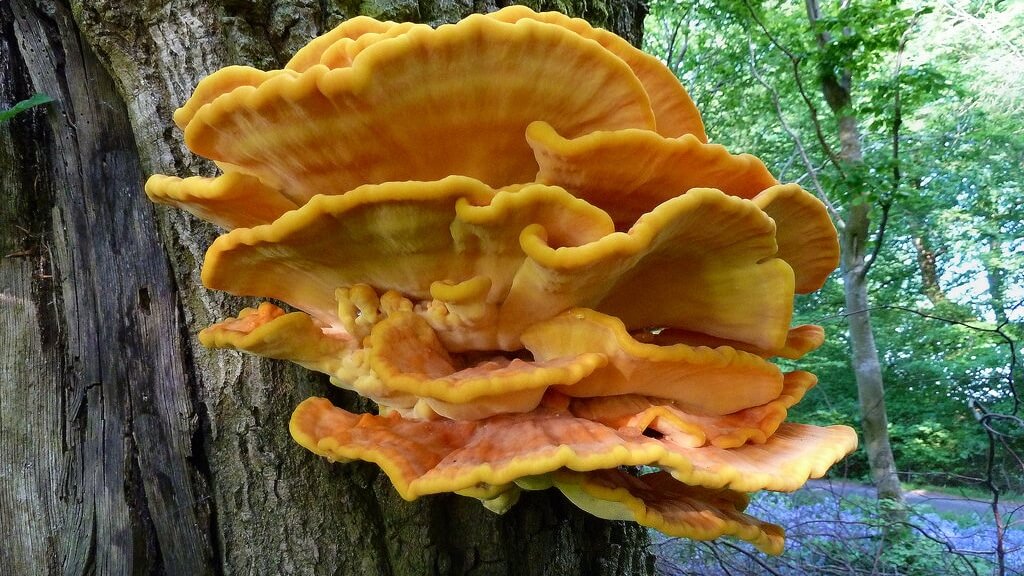 It tastes so much like the bird when cooked that it has even earned the nickname “chicken of the woods.” According to Atlas Obscura, it can be fried and sauteed for creamy vegan pasta dishes or breaded and turned into nuggets.

If you’re feeling adventurous, the mushroom is an easy one to forage due to its bright distinctive color. Although Atlas Obscura warns that in North America, it could be mistaken for one of its close relatives – laetiporus gilbertsonii, laetiporus conifericola, and laetiporus huroniensis – which could cause stomach problems.

“Chicken of the woods are parasites, decomposing or infecting living trees,” says the Forager Chef on his blog. The chef specializes in creating recipes out of food he has picked or foraged for himself, particularly mushrooms.

His description doesn’t sound the most appetizing but according to the foraging expert, chicken of the woods is one of the “best” mushrooms he’s ever eaten. The chef has created a wide variety of recipes with the ingredient, including Pickled Baby Chicken of the Woods and Wild Mushroom Conserve.

The chef isn’t the only one to embrace the potential of mushrooms; brothers Derek and Chad Sarno – the founders of plant-based brand Wicked Kitchen – are working on the launch of a new mushroom-based meat company.

Named “Wicked Meaty,” the new initiative will see the duo work closely with chicken farmers, helping them transition to sustainably grow mushrooms instead.

The brothers are keen advocates of the potential of mushrooms for mimicking meat, using them heavily across their vegan ready meal range Wicked Kitchen, exclusive to Tesco.

Derek said in an Instagram post last year, “I [have] a dream we move away from raising animals to kill for flesh and food, [that’s not] working anymore. Mushrooms are an answer and we’re showing how it works, we’re proving and it’s coming, I feel it.”