If you were wondering when a supermarket would put the literal “grow” in “grocery” — the wait is finally over. At least, it is for residents of Bridgewater, New Jersey, where the newest Whole Foods Market/Amazon location is apparently a portal to another dimension where supermarkets grow unicorn-colored oyster mushrooms right in the store’s produce section inside a blue-lit portable fungi farm.

Part of the new store’s expanded produce section, the mushroom farm aims to add “a level of innovation and intrigue that customers will find very interesting,” Chris Manca, Whole Foods Market’s local program coordinator for the Northeast region, said in a statement.

The in-store farm, created by a company called Smallhold, out of nearby Brooklyn, is expected to produce about 120 pounds of mushrooms each week. It’s the first retail partnership for Smallhold, which has its mini fungi farms in select local area restaurants. Whole Foods says it’s already looking at placing the Smallhold farms in additional stores. 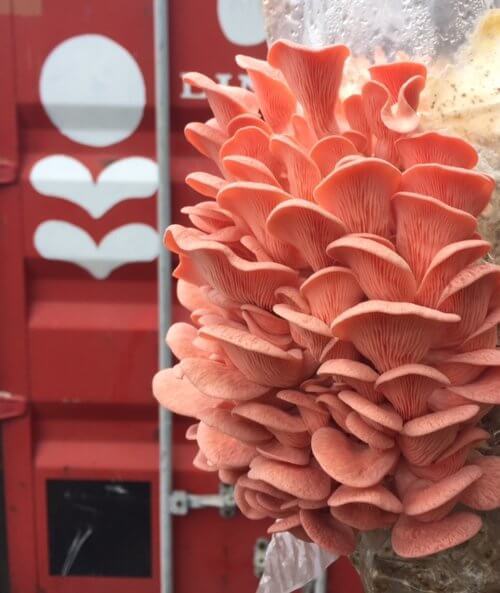 “It’s a glowing box. It has lights in it. It attracts the eye. It attracts people to the produce aisle. And kids love it,” Adam DeMartino, co-founder and COO of Smallhold told Supermarket News.

The meaty-like oyster mushrooms are started at a nearby Smallhold facility and then transported to the special glowy blue-lit farm from the future where the magical (but not “magical”) mushrooms continue to grow in the stores. Consumers can choose between the three unicorn-ish colors: yellow, blue, or pink once they’ve been properly “harvested” by a Whole Foods or Smallhold employee.

The farm design allows for adjustments, so the stores or restaurants can grow fewer mushrooms if demand wanes. But that’s not likely to happen anytime soon as mushrooms are some of the hottest produce items of the past several years. The U.S. mushroom market was valued at more than $1.2 billion in 2016, and as consumers continue to seek healthy, tasty, and versatile meaty plant-based options, mushrooms will continue to trend for the foreseeable future.

Growing food in-store also ticks off a few other major concern for today’s shopper beyond just the futuristic foodstuffs: it’s locally grown and reduces transport. Transportation produced 27 percent of 2015 GHG emissions, according to the EPA. Food often travels thousands of miles to be on a supermarket shelf at peak ripeness. Not only is that contributing to climate change at a dangerous pace but it’s also delivering food that’s days or sometimes weeks old. “These mushrooms will also be the freshest possible produce that you can buy,” said Manca, “and we know our shoppers will be excited about that.”