In honor of World Vegan Month this November, Mya has urged her close to 1M followers on Twitter to take a vegan pledge. A passionate vegan herself, Mya even attached a friendly graphic and mentioned how ditching meat for a month saves 30 animal lives. 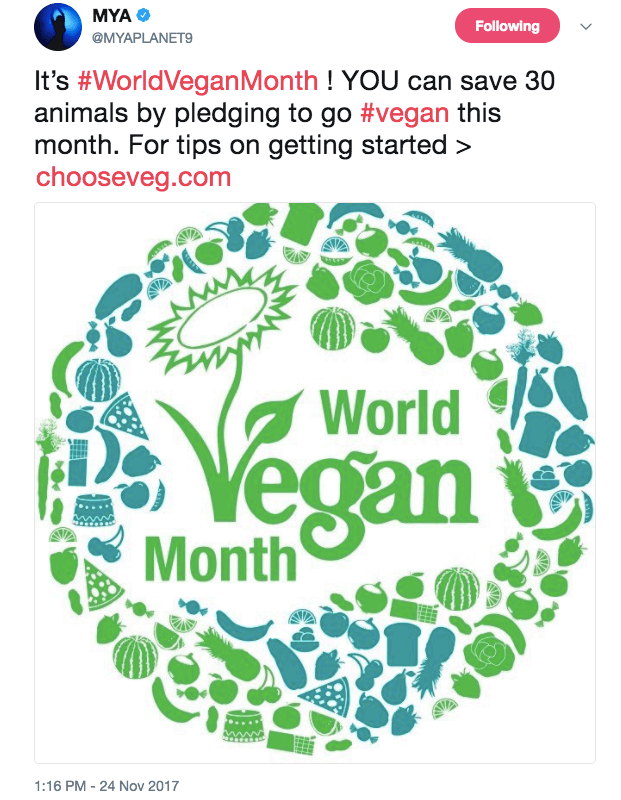 A vegan pledge is where someone chooses to go vegan for a set amount of time, with the view to continue that lifestyle after their pledged time ends. Most places, such as The Vegan Society and PETA encourage a 30 day pledge, which is said to be enough time to notice the positive changes to bodies, wellbeing and energy levels.

There are many places online where people can pledge going vegan, or people can arrange their own pledge elsewhere.

This thoughtful tweet isn’t the first time Mya has spoken out about her vegan lifestyle and encouraged everyone to try it. In an interview with animal rights organisation PETA, Mya spoke about how eating a whole food, plant based diet helped to cure her anaemia and said she would definitely recommend the lifestyle in every possible way.

If veganism is as highly approved by Mya as she regularly affirms, why not give it a go too by taking a pledge to go vegan?