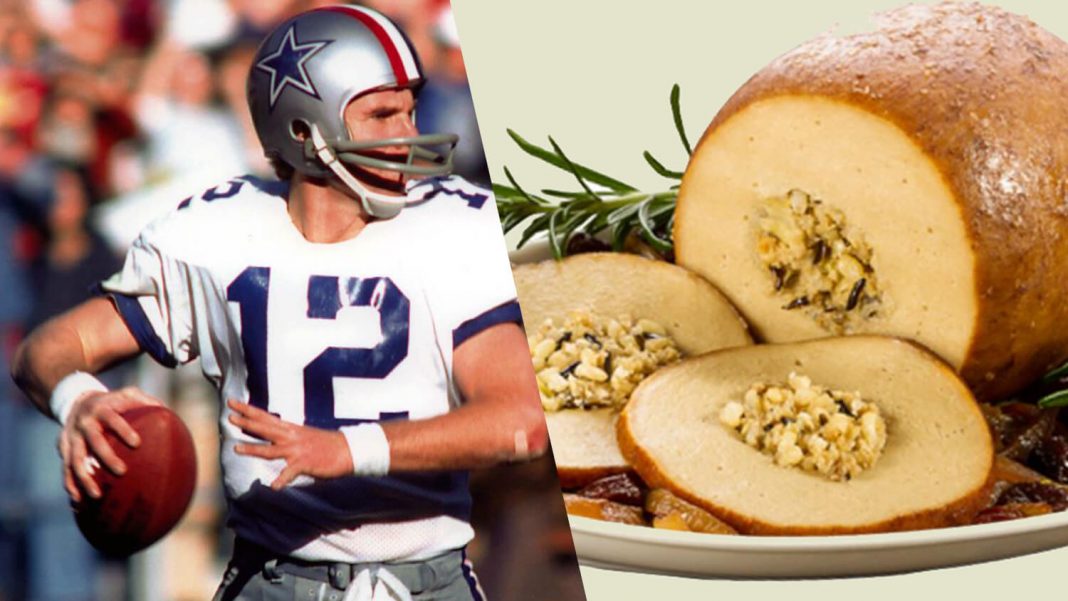 Thanksgiving is a day of traditions for many families. For some, it starts with watching the annual Macy’s Thanksgiving Day Parade, followed by gathering with friends or relatives to spend time together while dinner cooks.

Going beyond the food, many families alternate between watching football and the “James Bond” movie marathon. One NFL tradition – dating back to 1989 – is the annual Turkey Leg Award, which is given to the NFL Thanksgiving Day game’s “most valuable player” (MVP). The tradition began on CBS but has since moved over to NBC Sports.

Every year, the award is the same: an actual turkey leg. In a recent letter to NBC Broadcasting and Sports Chair Mark Lazarus, Ingrid Newkirk – president of the international animal rights organization PETA (People for the Ethical Treatment of Animals) – is urging the channel to swap the turkey leg for a vegan Tofurky Holiday Roast.

“We are struggling to fulfill the demand that we’ve helped to create.” – Jaime Athos, CEO Tofurky (link in bio for article)

Newkirk implored Lazarus to consider the organization’s supporters, along with vegans and vegetarians across the country, who are sports fans that enjoy the game up until the Turkey Leg Award.

“Please do not lock us all out (and offend many of us)—instead, please announce that you’re renaming it, preferably this year, but if not, make this your last,” she wrote. “We would love for you to make it a ‘Tofurky Roast Award’ and adopt a new game plan for players’ health and animals, but if that doesn’t appeal to you, please make it something neutral that everyone can appreciate.”

The PETA president added that the organization would be more than happy to donate Tofurky roasts to the event. Such an offer was accepted last week by MLB team the LA Dodgers, which will give away 100 free Tofurky roasts as part of its annual Community Thanksgiving Turkey Giveaway.

Newkirk explained that turkeys are sentient animals, each with their own personality: “As you must know, turkeys are smart, sensitive birds who have been known to enjoy clucking along to music and love to have their feathers stroked. In nature, the chicks stay with their mothers for up to five months, and they like to eat meals together as a family, much as humans do during the holidays.”

Despite this, an estimated 46 million birds are subjected to violence in the name of Thanksgiving; some are even dragged through inefficient electrified stun baths, leaving many conscious and able to feel pain, before having their throats slit.

While male professional athletes are typically expected to eat meat to stay strong, Newkirk added that NFL players, such as Tom Brady, Derrick Morgan, and Theo Riddick are thriving on a plant-based diet.