The number of Brits eschewing meat has skyrocketed to nearly eight million says a new survey of more than 2,000 people. According to the research, between the number of vegetarians, pescatarians, and the increasing number of vegans in the UK, the segment of the population now classified as adhering to meat-free diets is triple the numbers from 2012.

“On top of that, 25% of the people plan to reduce their meat consumption in the next 12 months,” The Grocer reported.

The meatless trend for 31 percent of the people surveyed is a direct result of animal welfare concerns. Twenty percent said they’re shifting away from meat out of environmental concerns, and one in six consumers said the ethics of meat production led them to remove it from their diets. The 18-44 age group was most likely to be meatless among those surveyed.

“With persistent media campaigns promoting plant-based eating, and a wide range of meat alternatives readily available, it perhaps isn’t surprising that consumers are thinking about changing their ways,” Lucia Juliano, head of CPG & Retail research at Harris, which conducted the survey, told The Grocer. 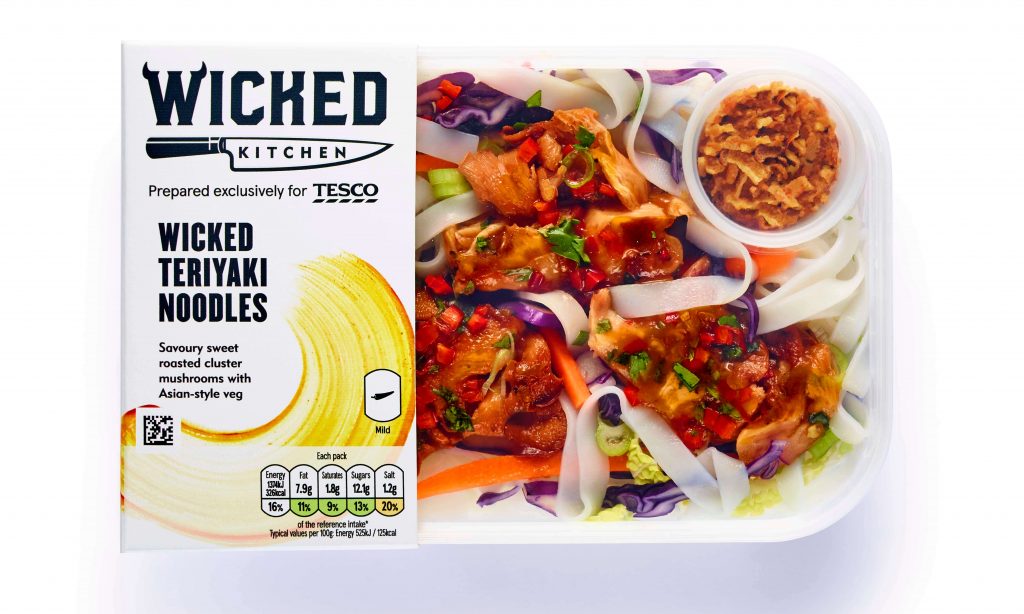 The research is supported by a shifting marketplace in the UK. Leading supermarket chain Tesco has prioritized meatless meals with its own director of Plant-Based Innovation, former Whole Foods Market Global Executive Chef Derek Sarno of Wicked Healthy, which he runs alongside his brother Chad. Tesco launched a comprehensive line of Wicked Kitchen label ready-made vegan meals throughout its stores in January. The success has already led to hints of line extensions in the works as well as the expansion of other vegan offerings in Tesco stores from its own private label heat-and-serve vegan chicken to bringing in brands like vegan meat producer Oumph!.

The Camden and Soho markets now feature numerous vegan vendors, and the number of vegan menu offerings and vegan restaurants throughout the UK continue to grow. A recent survey by the food delivery app Just Eat found a significant spike in vegan takeaway orders in Ireland.

Despite the growing interest in meat-free meals, Harris notes that prices for some vegan products may be deterrents for shoppers, suggesting retailers and manufacturers be more “conscious of price” as 50 percent of the meatless products reviewed for the survey were more expensive than meat.

But for millennials and Gen Z, price doesn’t appear to be deterrent —  35 percent of 18-to-34-year-olds plan to continue reducing their meat consumption over the next year.

“It seems like times are changing,” Harris said, “especially for the younger generation.”