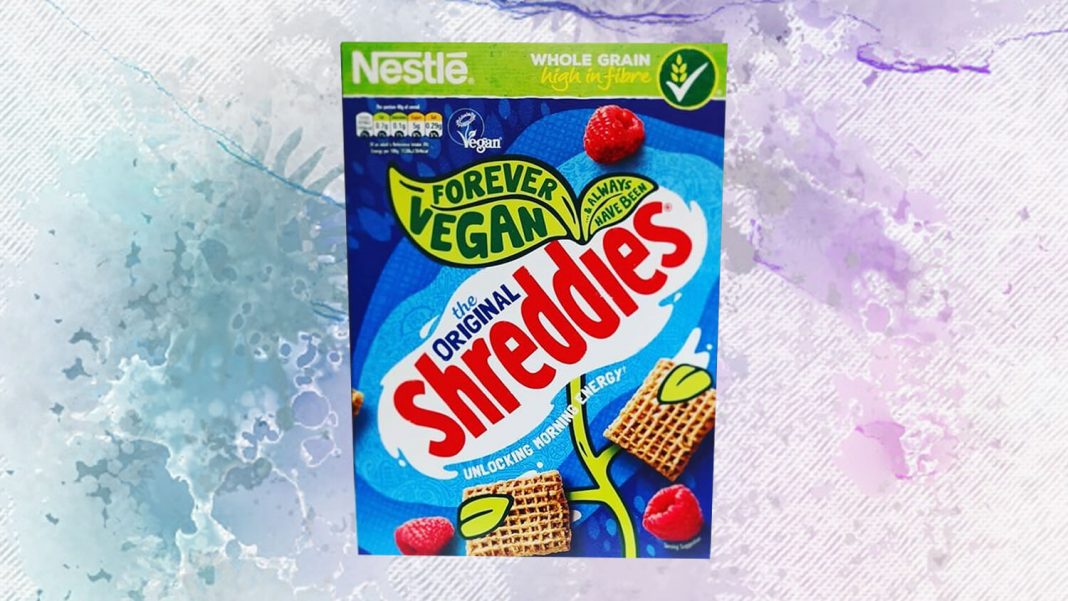 International food and drink company Nestlé is proud of its vegan products; the company has even introduced a new label to its popular Shreddies cereal boxes that reads “forever vegan.”

Made from simple lattices of whole grain, naturally vegan Shreddies are packed with vitamins and nutrients, according to Nestlé, which began making the cereal back in 1953.

Instagram user Natalie Schaer spotted a box with the new vegan labelling in her local supermarket. She posted a picture of the product on social media with the caption, “I think it’s really positive seeing things like this on mainstream food items. Veganism is becoming a norm!”

Stefan Palzer, Nestlé’s Chief Technology Officer, agrees with Schaer that the rising popularity of meat-free living is more than just a trend. He said in a statement earlier this month, “Vegetarianism has never been this popular before and it’s here to stay, I’m convinced about that.”

Palzer’s statement followed the announcement of a new plant-based product by the “world-leading” company. Nestlé is set to launch a new vegan meat patty named the Incredible Burger, as part of its Garden Gourmet brand.

This isn’t the first time the company has shown an interest in vegan and veggie products. Last year, the food and drink giant acquired Sweet Earth, a vegetarian and vegan food company, and earlier this year, it purchased a majority stake of organic plant-based food business Terrafertil.

Nestlé is not alone in embracing vegan products. Global consumer goods giant Unilever recently purchased The Vegetarian Butcher, a Dutch veggie and vegan meat company founded by a former cattle farmer. The brand makes a variety of products, including nuggets, burgers, and even bratwurst, all with a similar taste and texture to traditional meat products.

Nitin Paranjpe – the president of Unilever’s Food & Refreshment’s Division – said of the acquisition, “The brand will fit in well within our portfolio of ‘brands with purpose’ which have a positive social impact [and] are better positioned to meet the needs of consumers.”