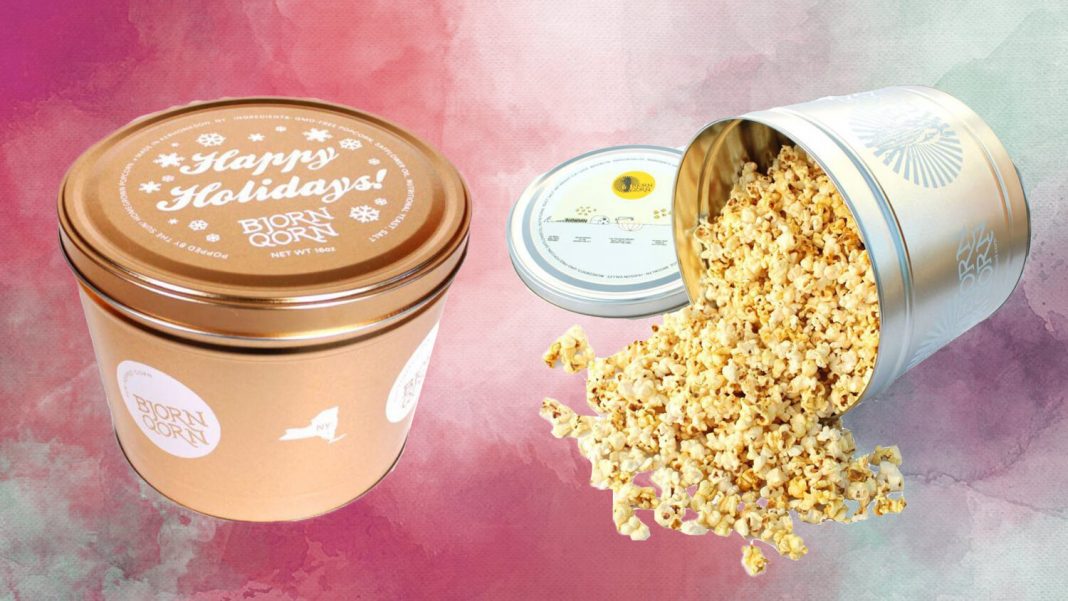 The $40 BjornQorn Holiday Tin features a golden Christmassy design and “packs two gallons of sun-popped popcorn made in the Hudson Valley” which is “super-nutritious, and absolutely addictive.”

The brand uses homegrown, non-GMO popcorn which it seasons with all natural, gluten-free, and vegan ingredients. According to the BjornQorn website, “There is no butter or cheese! BjornQorn’s special flavor comes from nutritional yeast, which is a high protein and high B-vitamin seasoning that is popular in vegan cuisine, but is especially great on popcorn.”

BjornQorn is one of many brands contributing to the booming vegan snack market, which is set to exceed $73 billion in value by 2028.

The craze for plant-based snacks was even noted by 12-year-old Jayden Hammond, a Chicago schoolboy who recently launched his own organic popcorn company. J-Rock’s Pop Gourmet Vegan Popcorn is free from artificial ingredients, GMOs, gluten, and high-fructose corn syrup, making it another desirable choice for consumers looking for a guilt-free snack during a Netflix session.

Getting ready for the 2018 BjornQorn gift tin season! Now in GOLD! On sale Nov 15! #popcorntin

What to Watch on Netflix?

Netflix has a number of films and documentaries that explore veganism. Its original movie “Okja” even made the NYTimes top ten best movies of 2017. The film follows a young girl named Mija and her beloved super pig, who is taken away by a meat company and exposes the realities of corporate animal agriculture.

The much-spoken-about documentary “What the Health” was also nominated for the Outstanding Documentary category at the NAACP Image Awards and the Most Valuable Documentary of the Year at the Cinema for Peace Awards.

The streaming service also recently launched a series called “Dogs,” which explores six true stories concerning the “unconditional love” between humans and “our best friends that lift us through life.”

Fans of Charlie Brooker’s “Black Mirror” may also want to keep an eye out for the new series in which vegan celeb Miley Cyrus is set to cameo in. A new natural history series named “Our Planet” is also set for release in April. Sir David Attenborough will narrate the eight-part series, expected to explore issues of climate change, overfishing, and deforestation.