The series, which debuted last month, centers on a group of people that have been tasked with creating the sixth branch of the U.S. Armed Forces: the U.S. Space Force. It satirizes President Trump’s launch of a new military branch of the same name in December 2019 with the passing of the 2020 National Defense Authorization Act.

In the second episode of season one—entitled “Save Epsilon 6!”—the series tackles the issue of using animals in space travel. (Spoiler ahead!)

In the episode, two animals—a dog named Theodore and a chimpanzee named Marcus—are sent into space for a promotional mission of obtaining “cute footage.” The duo, who were abandoned in space after completing their mission, are then tasked with making repairs to the spacecraft.

Although it’s fictional, animals have been sent into space in the past. 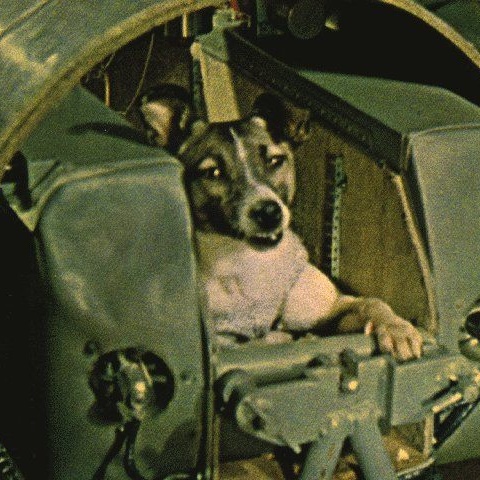 Laika was the first animal to orbit outer space; she died during the flight. | NASA

In 1947, fruit flies became the first creatures launched into space.

In 1949, a Rhesus monkey named Albert II became the second lab monkey (there is little documentation on his predecessor, Albert I) to be sent into outer space. According to NASA, Albert II reached an altitude of 83 miles before dying on impact.

Albert II isn’t the only animal to die for the sake of space travel. Before humans went to space, scientists sent a number of animals—including dogs, chimpanzees, and other monkeys—to determine whether or not it was possible to send a living organism safely into the great unknown.

In 1957, Laika the dog became the first animal to actually orbit the earth aboard the Soviet Union’s Sputnik 2. She died during the flight.

Of the early flights using animals, Julie Robinson, NASA’s chief scientist for the International Space Station, told Space.com: “We didn’t even know if humans would be able to digest their food [in space].”

She continued: “We were concerned … that humans might suffocate on the contents of [their] own stomachs if it all went floating up.”

While it’s now clear that humans can travel in space without suffocating on their food, animals are still being used as test subjects and subjected to experiments to study how outer space affects the human body. In 2018, the SpaceX Drage spacecraft launched with 20 mice on board in a study to determine how a creature’s physiology and sleep schedule responds to the stress of being in space.

The use of animals in space has been a point of contention for animal rights advocates. Many animal rights groups, including Humane Society International (HSI), have launched campaigns urging for the end of such animal experimentation.

On the use of animals for space research, Andrew Rowan, HSI’s president, told the Dodo: “It’s not necessary.”

“[They are] a waste of time, intellectual capacity and money. There are masses of data in the published literature on the effects of space on living creatures,” he continued. “This is about bragging rights.”