The Netherlands is free of street dogs.

According to estimates, there are more than 200 million stray dogs in the world. A number of these are in places like Bali, Indonesia and major cities in India, where stray dogs are simply accepted as part of everyday life.

The problem isn’t exclusive to Asia. NPR reported in 2017 that around 3.3 million dogs enter U.S. animal shelters every year.

But in Europe, in the Netherlands, the stray dog population is completely under control. The country claims it no longer has any stray dogs on its streets at all, thanks to a number of factors.

According to the Dutch Review, the country implements a CNVR (Collect, Neuter, Vaccinate, and Return) program, which keeps the population under control.

The country also has an animal police force — the Netherlands Animal Control — which monitors crimes against pets and rescue animals. Citizens can also call the organization if they see a stray on the street, it will immediately rescue the animal and move it to a no-kill shelter.

Citizens are also heavily encouraged to adopt and not shop. Some municipalities have even introduced higher taxes for shop-bought dogs to encourage people to adopt for financial reasons.

Why Adopt a Stray Dog? 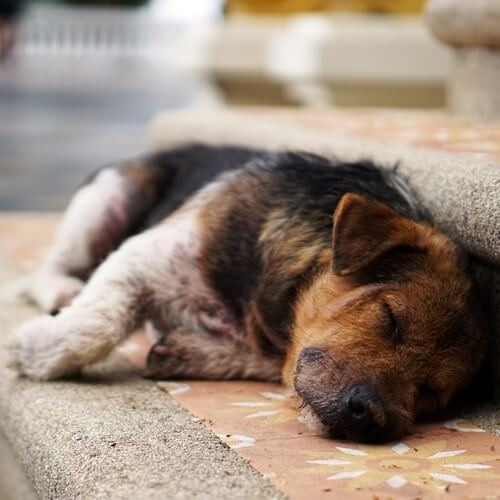 Shelters often have to euthanize stray dogs in the U.S.

According to the Humane Society of the United States (HSUS), if you’re looking for a new pet, your first port of call should always be an animal shelter. “Overburdened shelters take in millions of stray, abused, and lost animals every year,” it explains on its website. “By adopting an animal, you’re making room for others.”

It will also cost you less, and you could save a healthy dog from euthanasia. The shelters in the Netherlands may be mostly no-kill, but across the U.S., nearly 3 million dogs and cats are euthanized in shelters every year. “[It’s] simply because too many pets come into shelters and too few people consider adoption when looking for a pet,” says HSUS.

“The number of euthanized animals could be reduced dramatically if more people adopted pets instead of buying them,” it continues. “When you adopt, you save a loving animal by making them part of your family and open up shelter space for another animal who might desperately need it.”