Although once considered a fringe movement, veganism is on the rise around the world. While its popularity varies from city to city, interest in veganism has seen a noticeable boom in countries like the U.K. and Israel, according to Google Trends. But there’s another country that’s dominating the vegan food industry: the Netherlands.

But what’s made the Netherlands such a vegan food paradise?

Martijn Lammers is a food and agricultural expert at the Netherlands Foreign Investment Agency (NFIA), which is part of the Dutch Ministry of Economic Affairs and Climate Policy. Lammers says sustainability and ethics have played a factor in why plant-based foods are trending in the country.

“If you look at the total picture, of land use and water use, of animal welfare, of energy, you need to take all of those into account, and on most counts you’re doing better with plant-based proteins,” Lammers told Invest in Holland.

Michiel Bakhuizen, the NFIA’s strategic advisor and spokesperson, told LIVEKINDLY that the plant-based economy is also fueled by a combination of other factors.

“Our history in food and our capacity and know-how to grow plant proteins were the base of our international position. This, combined with our experience in R&D to create great and healthy products, our logistical infrastructure, and location made our plant-based cluster widely recognized,” he explained.

“The Netherlands simply combines elements that are needed for plant-based food innovations: An international oriented strong company base allowing good ideas to scale rapidly, a strong science base that provides ideas and technologies, a government that works with science and industry in order to build a sustainable economy, and various financing opportunities,” he continued.

For starters, the general public’s interest in veganism has surged throughout the country. According to data compiled by market research firm IRI Nederland, vegan and vegetarian meat has become more popular in the Netherlands while animal-derived meat sales are down.

In order to meet the growing demand, grocery stores are churning out more plant-based products. Since 2017, the number of vegan proteins in Dutch supermarkets has grown by 51 percent. Albert Heijn and Jumbo — two of the Netherlands’ largest supermarket chains — have both increased their vegan food ranges. Since 2016, the former, in particular, increased its plant-based options by 33 percent.

The country’s location makes it an ideal trade hub: it has four major seaports and is centrally located in Europe. And although the Netherlands is about 237 times smaller than the U.S., it’s the second-largest agricultural exporter in the world. The U.S. is number one. In 2019, the Netherlands exported 94.5 billion euros worth of products like onions and potatoes to other countries.

The Netherlands’ vegan food industry even has backing from the Dutch government.

In 2018, the Council for the Environment and Infrastructure — a government advisory body — recommended that the country reduce its meat intake in order to help cut greenhouse gas emissions.

In its report, the Council advocated for a more sustainable diet, which “contains proportionally much less animal protein and more plant protein.”

The Council recommended that the “government work with the whole food value chain to ensure that the proportion of animal protein in the Dutch diet is reduced from 60 percent at present to no more than 40 percent by 2030.” 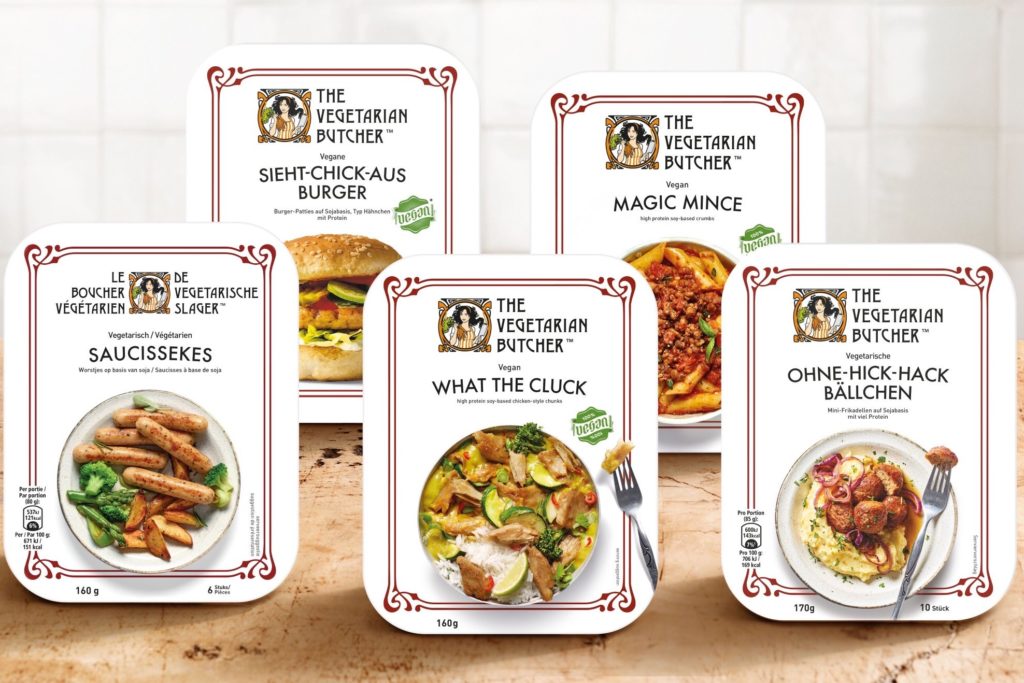 Companies are offering more plant-based food products in the area. | The Vegetarian Butcher

With interest in veganism rising in the Netherlands, companies are moving in to offer more plant-based food options.

According to The Protein Cluster — a Dutch innovation platform that brings together the world’s plant-based startups — the East Netherlands is home to more than 60 companies and research institutions alone.

Dutch brand Vivera launched the first commercially available vegan steak in 2018. The following year, its parent company — Vivera Foodgroup — sold its frozen and chilled meat brand Enkco. The sale made it one of the first meat companies in the world to ditch animal-derived meat in favor of plant-based foods.

In 2019, the Netherlands-based meat processing company Bolscher announced it would launch its own plant-based meat brand. And last year, Dutch meat giant Vion also revealed it would be turning a beef processing facility into a dedicated vegan meat factory.

A combination of Dutch innovation and collaboration has also made the Netherlands a frontrunner in the vegan food sector. “Innovation often comes from working together in multidisciplinary projects—the Dutch approach,” Bakhuizen said. “This requires experts in their field to be interested in another field and being open to collaboration. Being a geographically small country with a direct mentality, for us, it has been proven to be easy to make these multidisciplinary connections.”

And major companies have taken notice and are investing big in the area.

“Being the Food Valley of Europe, our country had a mix of homegrown businesses as well as foreign companies that impacted the role of the Netherlands as a plant-based country,” Bakhuizen explained.

Food Valley, also referred to as the “Silicon Valley of food,” is a region in the Netherlands, located an hour outside of Amsterdam—another one of the largest agribusiness hubs in Europe. Food Valley is comprised of a number of food tech companies and research institutions.

The Upfield Group is the parent company to plant-based margarine brand Flora and Greek vegan cheese brand Violife. It also plans to open a €50 million research facility in the area. The Upfield Food Science Centre will develop new dairy-free products like vegan cheese and butter. Upfield plans to open the facility before the end of 2021.

The area has even attracted the likes of Beyond Meat. The California-based food tech company opened a co-manufacturing facility in Zoeterwoude. The facility produces its flagship Beyond Burger and Beyond Sausage products. The company also acquired a manufacturing plant in Enschede. Beyond Meat plans to open it by the end of this year.

The plant-based food sector still has a long way to go in outpacing the meat industry. But Lammers says, it’s well on its way. “We’re only at the beginning of this, but the impact is growing. Once the meat industry becomes more involved, we’ll see a big push in terms of price but also in terms of what’s possible,” he told Fast Company.