Londoners are about to be treated to a new vegan affair; an all-day vegan market is due to hold its inaugural evening next weekend.

Ethical lifestyle magazine, Bright Zine, that doubles as the night market organizer took to Twitter to announce the news. “If you’re in London next weekend you won’t want to miss It’s A Vegan Ting, Waterloo’s first #vegan market! We’ll be there launching Issue Five [of its magazine] and eating ALL of the vegan food on offer,” it commented on the upcoming event to be held on June third at 26 Leake St, Waterloo, a street that is home to the “Banksy” tunnel where big-name artists such as Drake, Fendi, Diplo, and Adidas have held events at before.

Later, Bright Zine told a commentator it hopes the market will become a regular thing. All profits are to be donated to FRIEND animal sanctuary, a no-kill sanctuary that provides a home for nearly 200 rescued animals in Kent. 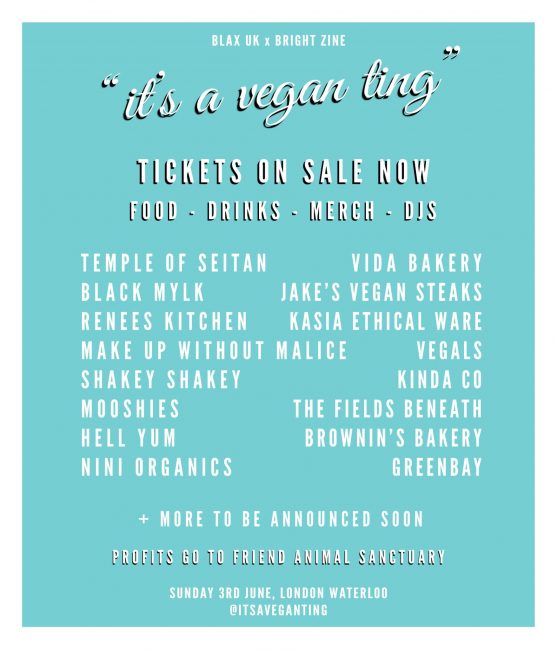 “The event will be made up of over 40 stalls serving up some of the best vegan treats London has to offer as well as a host of amazing DJ’s selecting the perfect musical backdrop to suit this brand new vibrant Sunday atmosphere,” the event is described as.

A multitude of vegan vendors are set to attend the premiere evening. Vegan fast food chain Temple Of Seitan, plant-based ice cream shop Black Mylk, Vida Bakery and Hell Yum to name a few. In addition to vegan eats and beverages, there’s set to be vegan beats with DJs in attendance. Further, the market will offer vegan apparel and Kasia Ethical Ware and Makeup Without Malice will be offering clothing and cosmetics.

London’s vegan scene is on a high note as of late. Recently, one of Fuller’s Brewery’s most popular London pubs turned its menu fully vegan and Dirty Bones cocktail bar is set to serve up Vegan Mac Daddy burgers, complete with a plant-based B12 patty by Moving Mountains. Also, the city’s plant-based fast food hotspot, Temple of Seitan, announced it is set to open a new convenience store and cafe in Hackney.

Get your tickets for It’s A Vegan Ting here.