In the past few months – despite controversy from a certain food magazine editor – Waitrose has openly embraced the world of plant-based food. In October, to celebrate an 85 percent increase in vegan and veggie product sales, the chain even launched 29 own-brand plant-based products, from pizza to carbonara to paella.

“With requests for more choice coming from our customers and partners, we could clearly see there was an appetite to have more vegetarian and vegan options in our shops,” said Waitrose’ vegetarian product buyer Chloe Graves earlier this year. “Increasing our range builds on the work we did last year to increase choice for our customers in this area.”

And now, the supermarket has added another new product: Move Over Meat Revolution Burgers.

Rivaling the “bleeding” Beyond Meat burgers that recently arrived on the shelves of competing supermarket Tesco, the new meat-free quarter pounders – made from a number of plant-based ingredients, including mushrooms, onions, and pea protein – pack in 20 grams of protein. 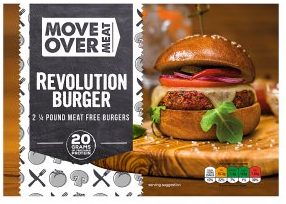 The Rise of Vegan Meat in the UK

Vegan meat is rising in popularity across the UK, as more and more consumers decide to ditch animal products for their health, the animals, or for the environment.

When Tesco launched the world’s first-ever vegan steak – made by Dutch brand Vivera – customers couldn’t get enough; 40,000 units of the product were sold in its first week of availability.

To keep up with the British appetite for plant-based meat, Vivera had to boost production to 100,000 a week. “The consumers in England are almost without exception very enthusiastic about the taste and texture of the steak,” Vivera’s commercial manager Gert Jan Gombert said back in June.

In fact, Brits love vegan meat so much that the UK recently became home to the world’s biggest ever veggie and plant-based meat factory. Quorn, one of the nation’s most well-known veggie brands, opened the factory earlier this year in a bid to help it to satisfy consumer demand. The factory is projected to produce around 1.33 million packs of Quorn a week, the equivalent of meat from 1,600 cows.