Food can be so many things. It can be a source of joy, nourishment, comfort, and pleasure. It can also induce anxiety, shame, guilt, and even fear. While many people seldom think twice about what they choose to consume on a daily basis, others struggle constantly with every morsel they choose, or choose not, to put in their mouth. This used to be the case for blogger and cookbook author, Maria Koutsogiannis. The mind behind the popular vegan lifestyle blog, Food by Maria, was not always the spunky creator of deliciously healthy vegan eats; she struggled with a severe eating disorder for years before discovering the bounty and freedom of the plant-based lifestyle. Her new cookbook, Mindful Vegan Meals, offers 75 recipes that recreate Koutsogiannis’ recovery story, including her eventual acceptance and celebration of food. This is not just a cookbook. It is the delicious retelling of one woman’s journey to find self-love through the healing power of food.

“To my teenage self, your confusion and hardships led me to being the strongest, most confident version of myself,” Koutsogiannis writes in the dedication. The book begins not with picturesque scenes of farmer’s markets or carefree stories of spending lazy Sunday afternoons in the kitchen, but with the author’s “six-year hell storm” battling bulimia. Openly speaking about vomiting into a toilet after each meal may not be the most orthodox or appetizing way to begin a cookbook, but Koutsogannis does not believe in filters. Case in point, she writes, “I’m sorry to those I hurt while sick, but I killed that bitch, just like all of you out there suffering will one day too.” 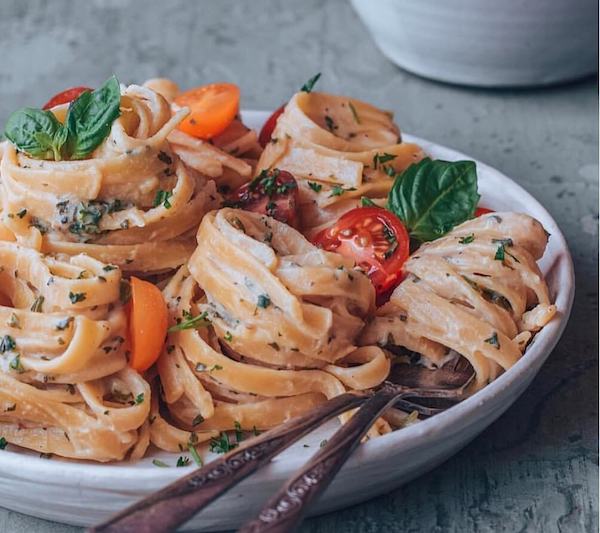 With the help of family, friends, and nutrition education, Koutsogiannis developed a positive relationship with food over time. Along the way, she learned about the plant-based lifestyle and claimed that it helped her to heal both her body and her mind. “It all came down to those damned plants…I was eating more vegetables than an herbivore and I felt really good. Like really good,” she explained. Going vegan also helped her to rediscover the foods she had not allowed herself to eat for so many years. “I realized that without meat, dairy and processed foods I could finally get that body I always wanted but without the societal pressures…I have a better connection with food and am not worried about the dishes and meals I eat because eating plants is always good for you!” She also announced, “I am no longer afraid of carbs,” which is a fear that has plagued pretty much anyone who has ever tried to lose a few pounds, not just those with eating disorders.

The recipes follow Koutsogiannis’ slow acceptance of various food groups, beginning with carbs and comfort meals. The meals in this section are warm, hearty, and seriously filling, but because they are whole food and plant-based, they will not leave you feeling sluggish, bloated, or guilty. The Greek-Style Jackfruit Gyros with Vegan Tzatziki and ‘Fries’ is an ode to her Greek roots, but she also branches out by offering stellar Italian dishes like Roasted Red Pepper Rigatoni Cake and Cauliflower Buffalo Bites with Spinach and Capers Pizza. That’s right. Buffalo cauliflower on a pizza. You need this recipe.

Moving on, the book dives into nutrient-dense soups, entree-sized salads, and filling Buddha bowls. The Works! Fully Loaded Quinoa Greek Salad will keep you nourished and happy for hours on end, and the Self-Love Buddha Bowl with Baked Falafel may just be the best bowl of food you’ve ever had. Finally, by the title alone, the Fuck Yes! Traditional Lentil Soup is a must. Bring it to work and when co-workers ask what that amazing smell is, you can simply reply “Fuck Yes!” 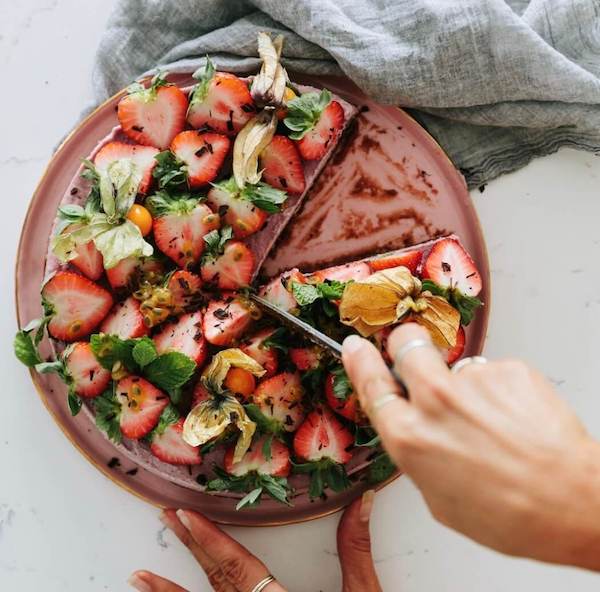 What about breakfast? Those who struggle with eating disorders rarely even consider eating this morning meal, and it has even become a trend among the intermittent fasting crowd to skip this meal as well. However, Koutsogiannis asks her readers to “fall in love with breakfast,” as she has found that eating in the morning has greatly improved her digestion, mood, and attention span. Koutsogiannis wants her readers to enjoy their mornings over a stack of her savory Green Waffles with Creamy Corn Salsa, Caramelized Banana & Chocolate Chip Oats, and Rich & Fruity Chia Pudding. She also encourages people to fuel themselves with refreshing and restoring beverages, including juices, golden lattes, and various homemade plant-milks.

Finally, Koutsogiannis writes, “Treat yourself, you deserve it,” to introduce her dessert chapter. However, you won’t find sugar-laden buttercreams or sickeningly-sweet confections here. According to Koutsogiannis, all of her dessert recipes are “obnoxiously simple, nourishing, and bomb as fuck.” She continues, “You don’t have to feel shitty after your sugar crash, so instead, try one of these recipes and feel fabulous!” On a hot day, whip up the Strawberry Ice Cream Cake, or for something a bit more cozy, go for Nanny Matilde’s Apple Crumble Tart with a Twist. When simply nothing else will do, the Someone Give Me a Damn Chocolate Cake, Okay? is an essential to calm any craving, especially when juxtaposed with a need to be “good.” This cake is intensely rich and decadent but made from plant-based, nutrient-dense ingredients. 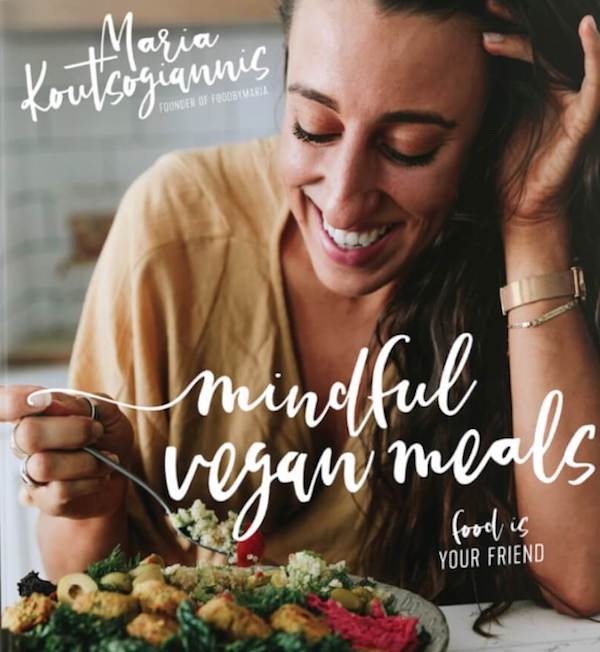 Many people reading this may be enticed by these recipes, excitedly meal planning for the fabulous new dishes they hope to create. However, if these foods still feel daunting to you, that ’s okay. Everyone is at a different point in their relationship with food, and it is not expected that someone who is struggling with an eating disorder can simply pick up a cookbook, start cooking (and eating) from it, and instantly overthrow a crippling disease that may have plagued them for years. However, Koutsogiannis hopes that by sharing her story, people can at least relate and see that there is a way out. It is possible to heal, and it is possible to stop the constant fear and anxiety over food. Koutsogiannis writes, “Your struggles mean something, keep listening and you will find your answer. Never give up. You deserve the world because you are enough.”

“Mindful Vegan Meals” is now available online and in stores.