The British car brand released the design in honor of its 100-year anniversary this year. The EXP GT is a 19-foot, two-door electric vehicle with self-driving capabilities. The design is both a nod to the brand’s signature look and what the company imagines the Bentley GT will look like in 2035, CNN reports.

The vegan leather used is manufactured in Italy from leftover wine industry grape skins. There is currently one company that makes animal-free leather this way: Vegea, a Milan-based brand founded in 2016. The door frames are made with ancient bog oak carbon dated to 3,000 B.C. The exterior uses recycled copper and paint made with rice husk ash, a byproduct of the rice industry that’s typically thrown away. 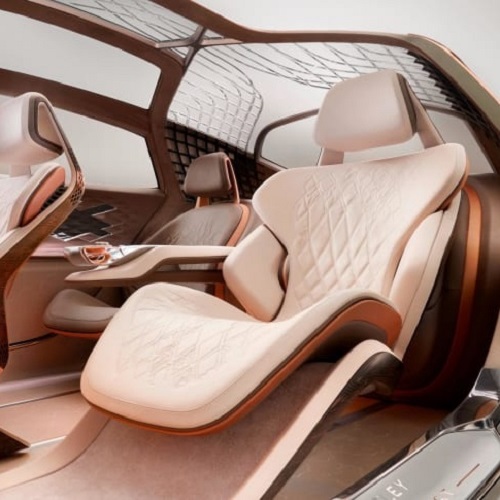 A digital rendering of the EXP 100 GT’s interior

The Sustainable Future of Cars

Bentley’s concept car isn’t completely vegan—it makes use of animal-based leather as well. But head of interior design Brett Boydell sees a future for sustainable, ethical materials like reclaimed oak and grape leather: “We know that, for some, sustainability is part of luxury now.”

Using eco-friendly and animal-friendly materials has been on Bentley’s agenda for a short while now. In an interview with luxury lifestyle magazine Robb Report, design director Stefan Sielaff noted that consumers are increasingly seeking cars that match their ethics.

“We all want to be sporty; we want to look younger than we are. Maybe you eat everything organic, sustainable, vegan, animal-free – and yet we’re using 15 hides of leather for our cars,” he said. “This is obviously the extreme, and things change bit by bit, but some people will want a car that better aligns with their belief system.”

All of the designs for Bentley’s EXP GT are being considered at its headquarters in England.