The shoe — created from one single material, thermoplastic polyurethane —  is made using Adidas’ signature technology, fusing pieces together with heat instead of using glue. These small details mean the trainer need not be broken down into its constituent parts like other brands. It can simply be ground into pellets, melted, and remolded.

Eric Leidtke, executive board member responsible for global brands said of the shoe, “FUTURECRAFT.LOOP is our first running shoe that is made to be remade.”

He added, “It is a statement of our intent to take responsibility for the entire life of our product; proof that we can build high-performance running shoes that you don’t have to throw away.”

The brand revealed the first stage as a beta test of the shoe. Two hundred selected participants will receive an early version, using and returning them to Adidas along with feedback.

Paul Gaudio, SVP of creative direction and future at Adidas commented on the launch.

“FUTURECRAFT seeks to break new ground, bringing new materials and processes to bear against the many challenges and opportunities we face in helping athletes make a difference in their game, in their life and of course, in the world they live in – the world we all live in.” 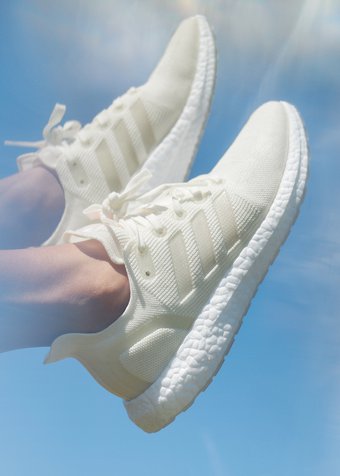 The Futurecraft.LOOP isn’t the first move the brand has made towards a more sustainable operation mode.

Adidas partnered with Parley for the Oceans in 2015, introducing its first shoe made “entirely of yarns and filaments reclaimed and recycled from marine plastic waste and illegal deep-sea gillnets.”

It initially only released 7,000 pairs of the shoe, which included the equivalent of 12 plastic bottles per pair and sold out instantly. Recognizing the popularity of the cause Adidas then announced it would release a further five million pairs.

Since then, the brand has committed to reducing its “virgin plastic” usage in both its products and its offices, as well as committing to using only recycled plastic in its products by 2024.

The brand has also partnered with sustainable designer Stella McCartney to make a vegan leather version of its iconic Stan Smith sneaker as well as a 3D-printed shoe launched earlier this month.

Adidas continues to work on finessing its processes and hopes to be able to launch its recycling programme alongside the general sale of the Futurecraft.LOOP in Spring 2021.